"A combination of bus, trike, and boat ride totaling to a 22hr trip to and from the most talked about island in Camarines Norte? It better be worth it.", I told myself. 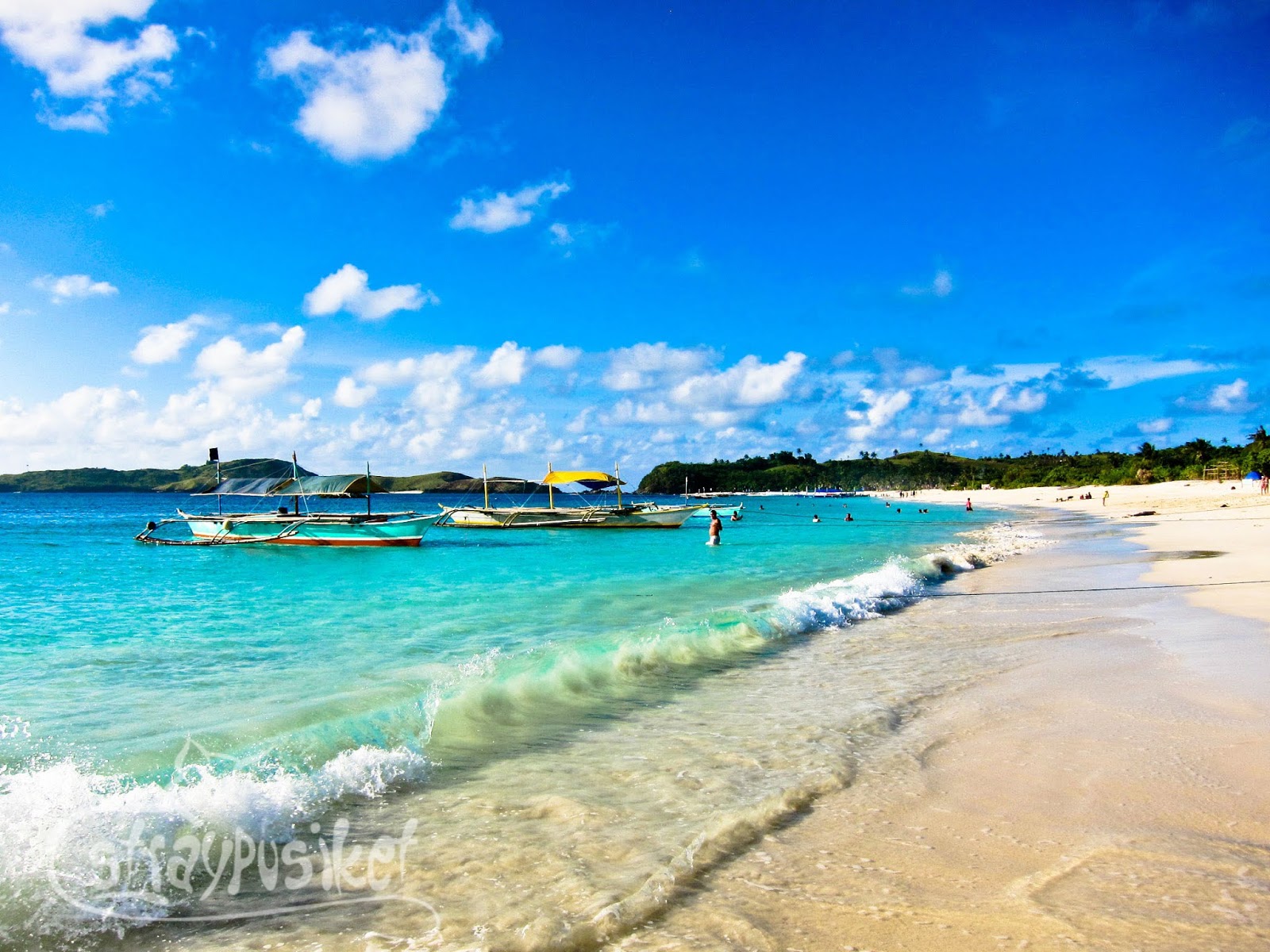 My friends and I don't normally go on vacation together during summer and seldom we go on long distance road trips. But this year, in just two months we were able to go on a camping trip to two remote islands in Luzon. The first being Magalawa Island in Zambales last March and just 3 weekends ago in Calaguas Island, Camarines Norte.

Since 2009, I've been reading blogs about the unspoilt natural beauty of Calaguas but the long trip going there, the lack of electricity, lack of  accommodation did not appeal to me then. Thanks to our friend Jego, who organized this trip (planning, budgeting, negotiating, etc.). It was actually a trip she and her college friends and colleagues have planned. Our HS barkada only got envy and joined.  Thus the group of 19.

April 12, 2013 - We almost didn't make it to the 7:45PM trip. Most of us got caught in traffic on our way to Cubao terminal because of a fire incident in San Juan. I was ready to give up the ticket and planning to take the 9PM bus trip to Daet with Dell, Maita and Deb. Our group was the last one to arrive and luckily we made it. I can feel that the other passengers were already cursing us. Dedma na. =)  5 minutes later, the bus left. Time check, 8:25 PM (Yes, we were that late.)

We made a short stop in Calamba (for a weewee break) and then a 30 minute break at Atimonan, Quezon around 1am. I'm sure we didn't pass through the infamous "Bitukang Manok" or Old Zigzag road but instead on the new diversion road on our way to Atimonan since it wasn't as steep or as "zigzaggy" as I imagined it to be. 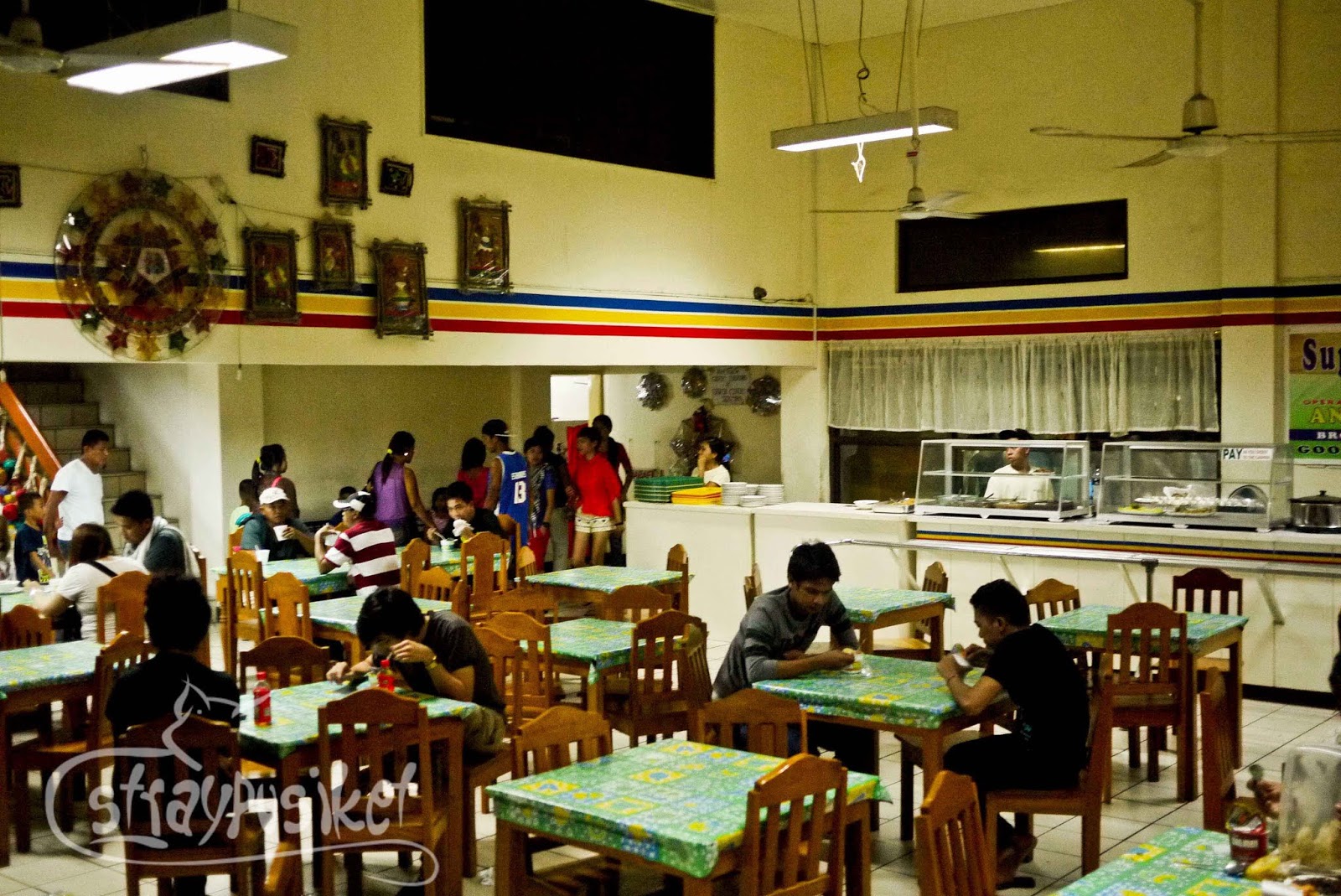 That was our last stopover and from there, we continued our journey towards Camarines Norte.

If we were lucky to have caught the bus before it left Cubao, then I think I was destined to be "malas" on this trip. I left the bag containing the tent fabric and rain fly on the bus when we arrived in Paracale. I only realized it when the bus was already about 20 meters away. We immediately called the bus conductor's mobile phone and asked him to look for the bag but he could not find it. At that point I was already thinking that one of the passengers must have picked it up so I begged him to ask the driver to stop the bus so we can follow by trike and look for it myself. It was inconsiderate of them that they told me they're only stopping in Panganiban even if they knew we were following them. Panganiban by the way is a freakin' 30 minutes drive by tricycle from Paracale.  Already hopeless, we (me and Dell) still pushed through Panganiban. Got off at the Superlines terminal and saw the 313 bus already parked. We searched on every seat but the bag was no where to be found. And so I gave up, went back to the tricycle and ask the driver to take us back to Paracale. We tried to forget it in the mean time so as not to ruin the entire trip.

The Malayan tourist Inn is the common meet up point in Paracale for tourists heading to Calaguas. They have a restaurant which opens as early as 5am where you can stuff yourselves up with their simple breakfast offerings. Dell and I shared an order of hotsilog while waiting for the others who bought our supplies from the market. 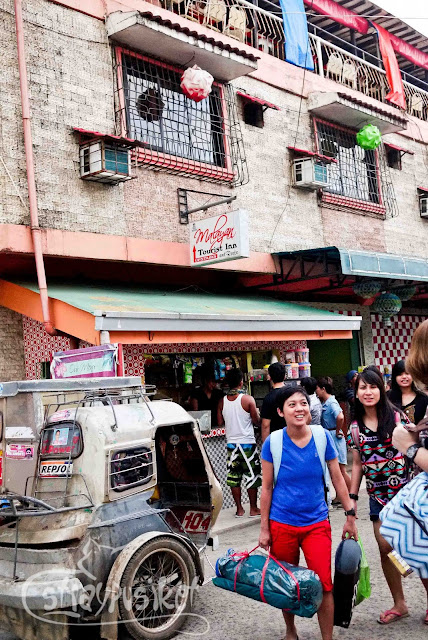 The port is just a short distance from the inn but it is still best to take the tricycle especially if you're carrying heavy luggage.

This was our ride to Mahabang Buhangin.  It's an outrigger boat that didn't look like it can accommodate 19 passengers. 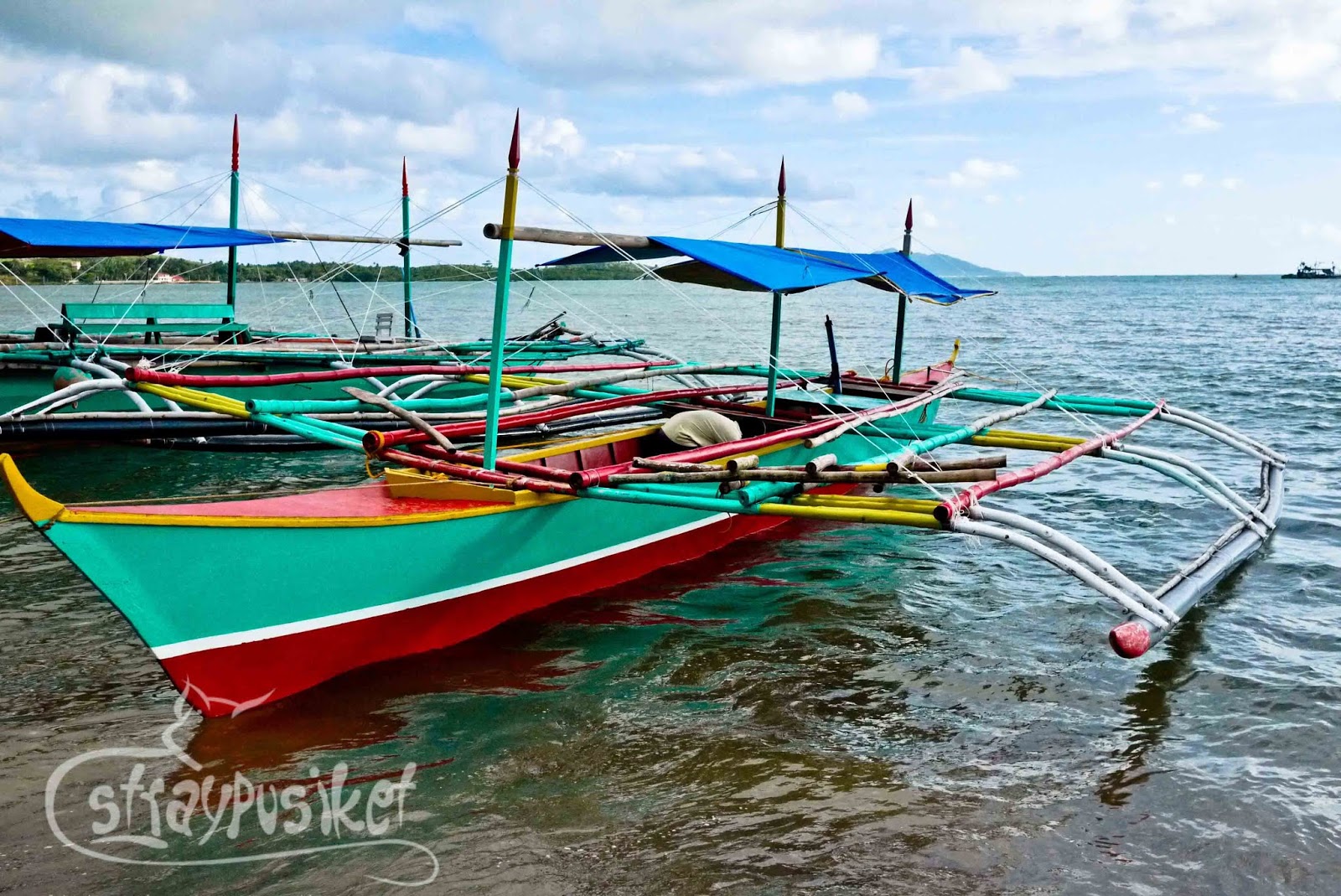 Here we were, waiting patiently as the assistants of Mang Boy (our boat contact) loaded our stuff. Then one by one we started to board the boat and find our seats.


Amazingly, all of us fit in the boat but it's not comfy as expected. Below is a photo of us in the boat to give you an idea of how small it is.

Who cares? Two hours is nothing compared to the 9 hour Manila-Paracale leg. But sailing against the mad waves of the Pacific? Uhmmmm...


protecting my hat from strong winds

Unbelievably, the ride wasn't scary at all. Except for a few "major, major" water splashes, it was completely safe.

As we approach the island, the dark blue water slowly transforms into clear turquoise and everyone started to take out their cameras. 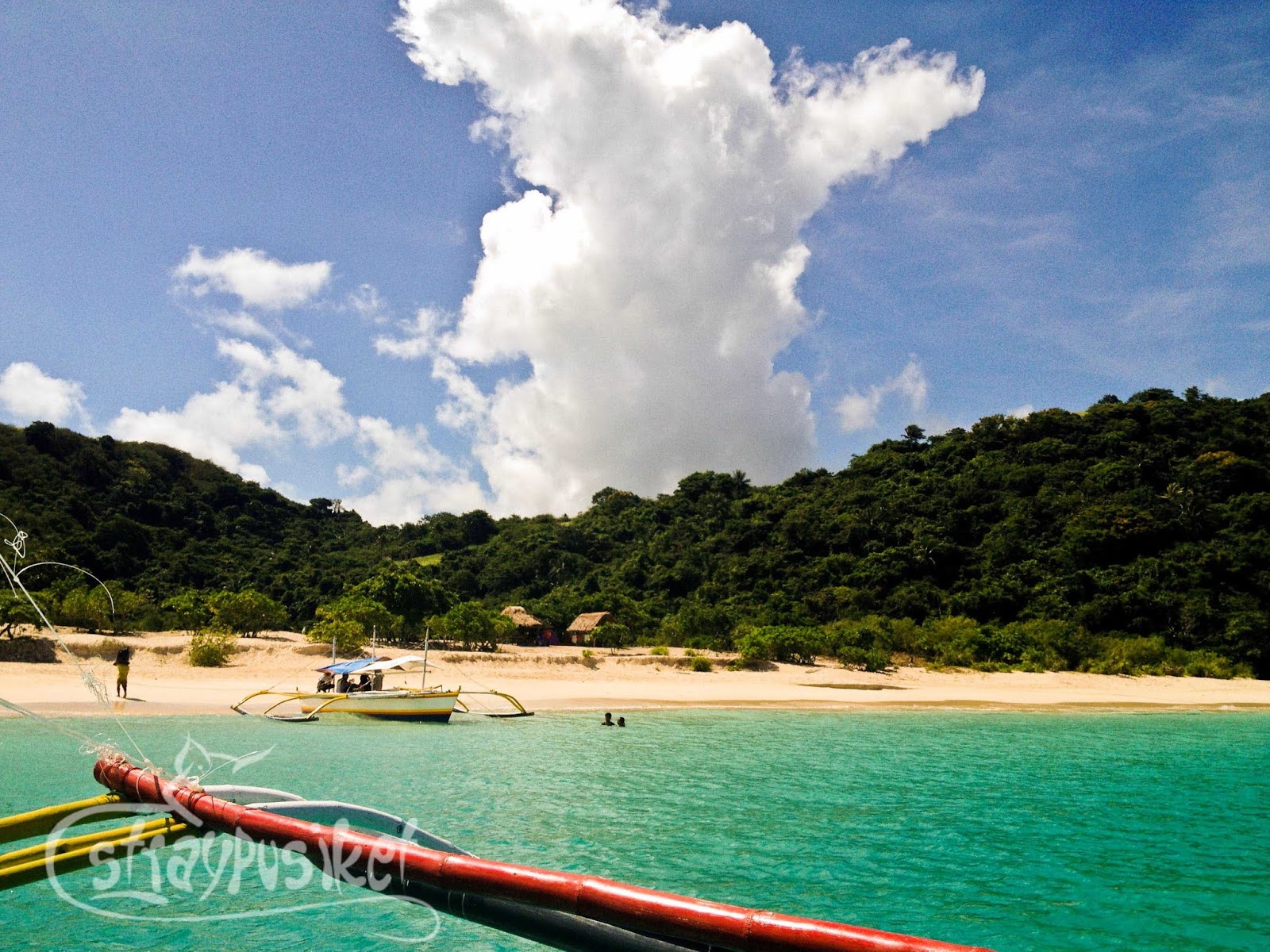 Someone got excited that he didn't wait for the boat to dock and jumped on the water! Haha!

It's paradise. I was in awe and it instantly became top 2 on my list.  (Boracay still wins my heart). I pulled out  my phone to text my mom that we arrived safely but there was no signal. Omaygash. So my phone served as a backup camera the entire time we were in the island. Ehehe. 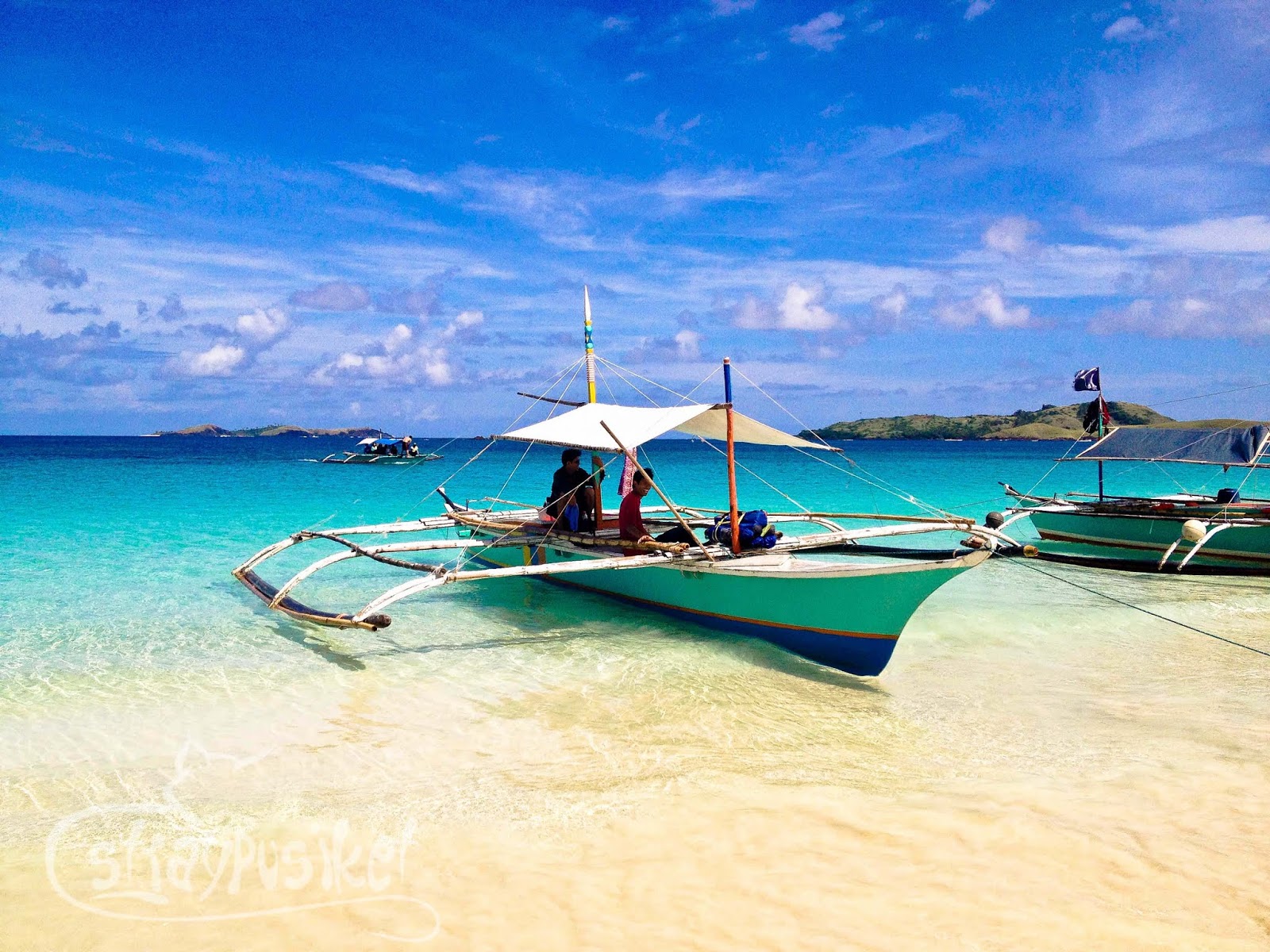 We rented a cottage and pitched our tents in the area surrounding it.

There was a sari-sari store just behind our cottage where we bought some refreshments.They also got canned goods, cooking oil, onions and other things you might need for cooking. 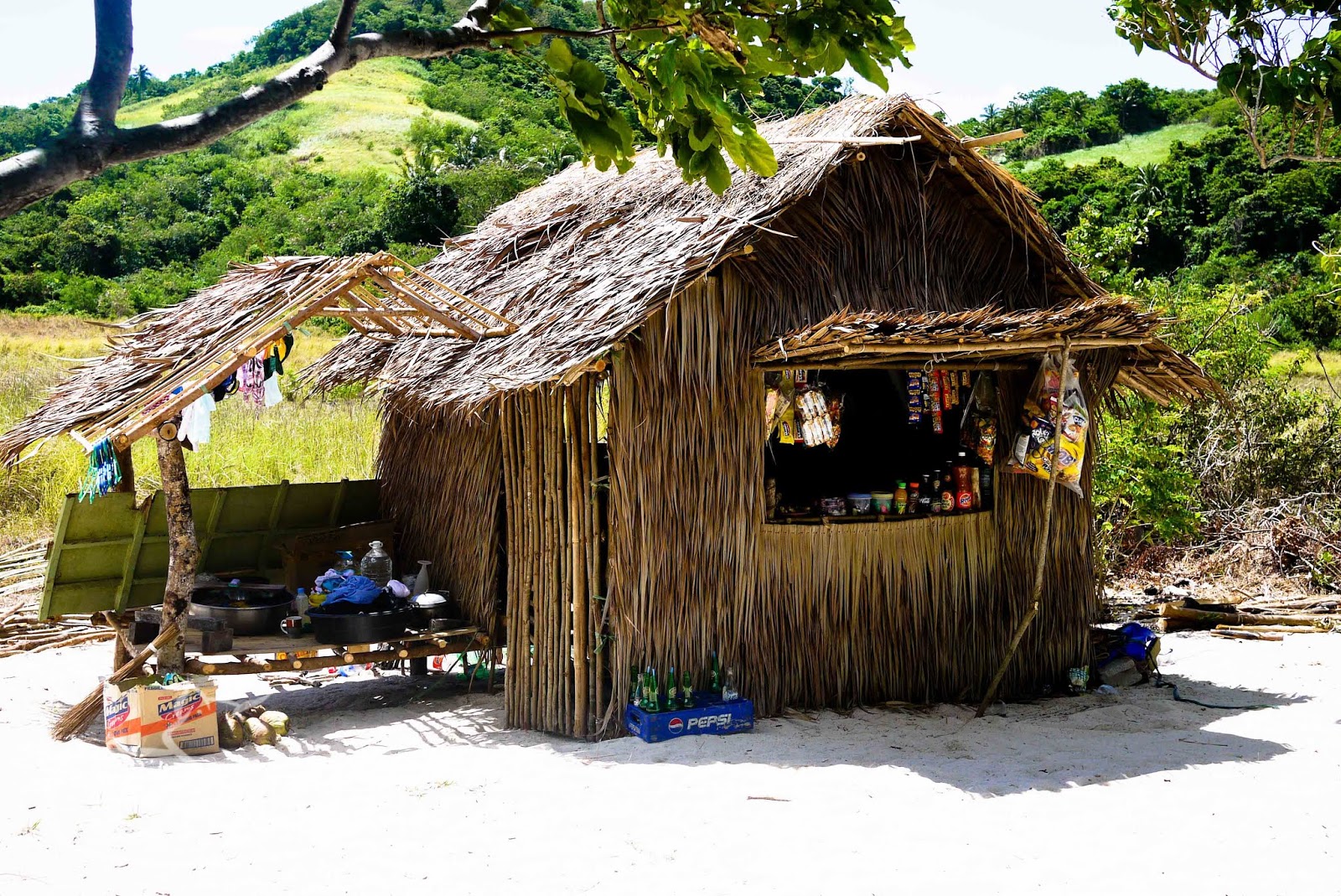 and a halu-halo stall nearby. Available until ice supply lasts...


the island's leftmost side

Since we didn't intend to get toasted on the first day, we took a nap to make up for the lack of sleep and fatigue we experienced during the trip. We only changed into our swimming gears when the sun looked a bit friendlier. 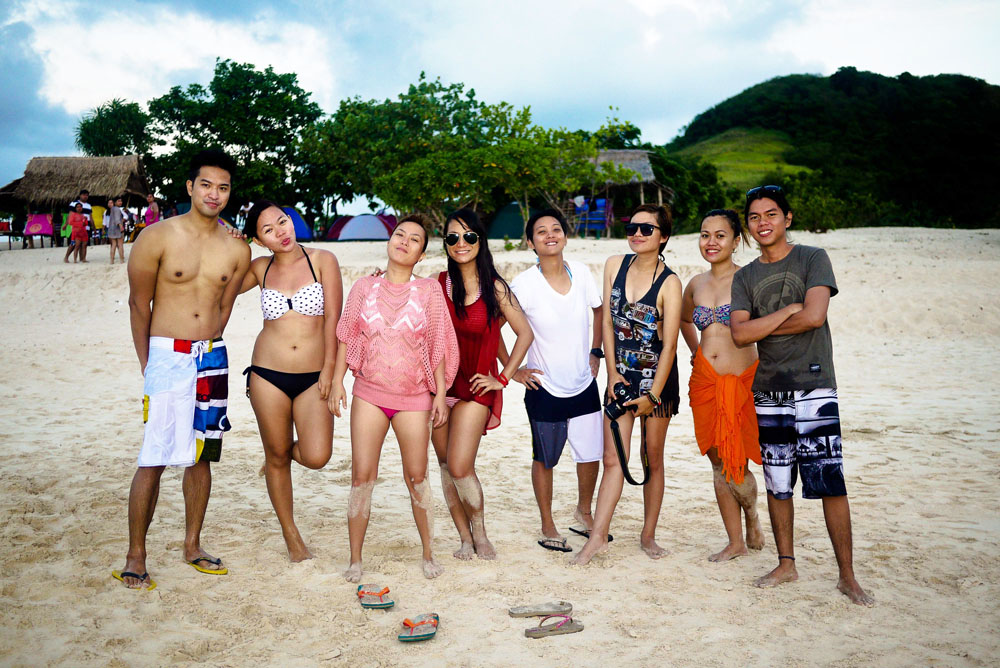 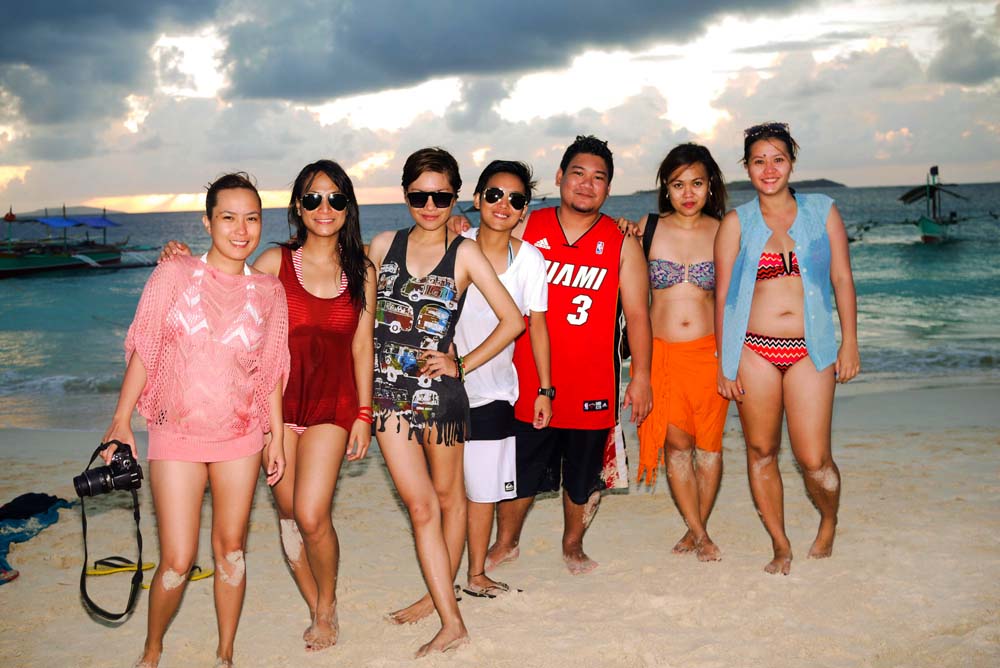 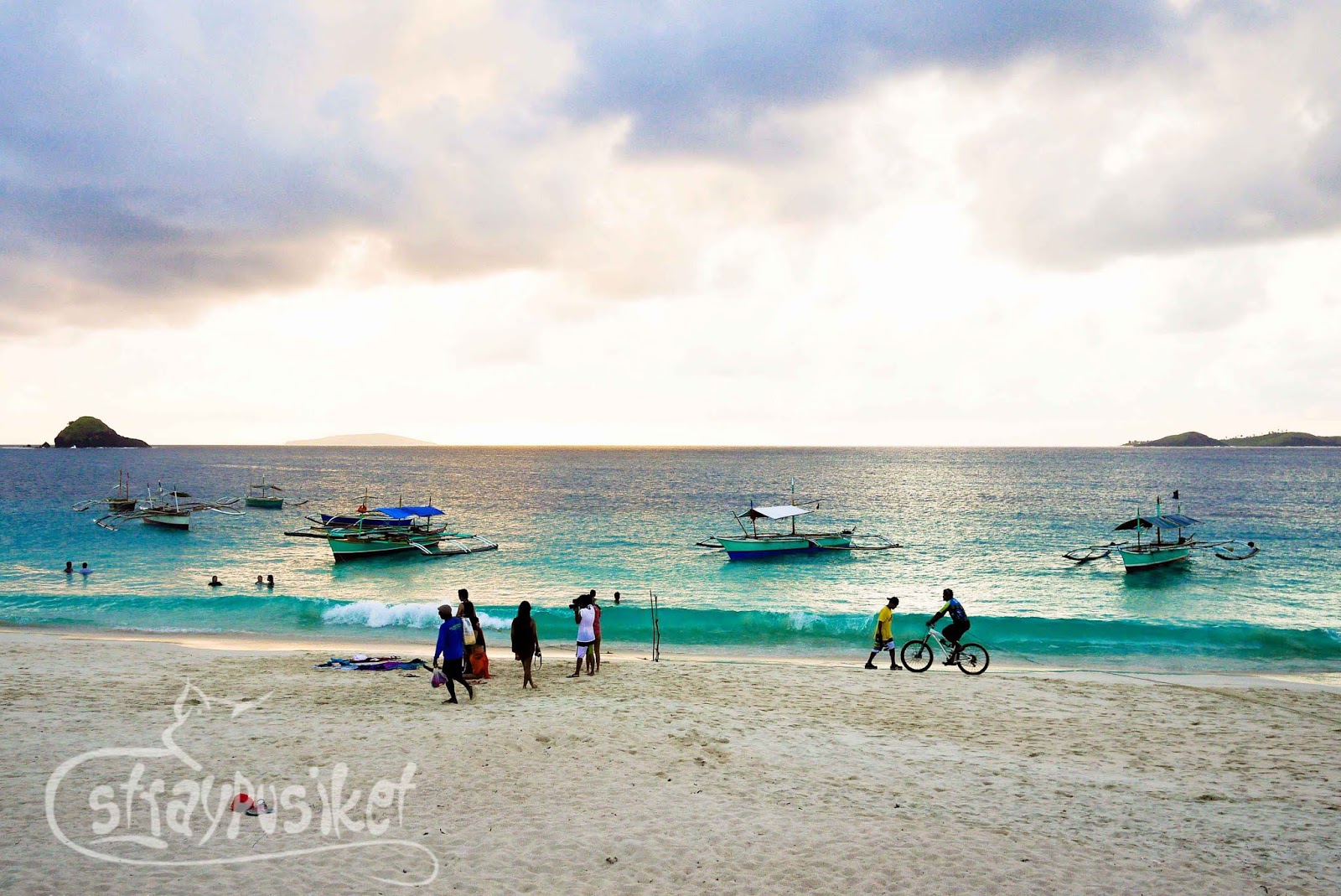 
The waves got bigger and bigger as the sun began to set. My camera almost got wet when our blanket was reached by the giant wave. It was also starting to get dark so it was our signal to collect our things and go back to the tent.


There is no electricity in the island so it was pitch dark when the sun finally came down. We had to rely on our small flashlights and lamp. But it's no biggie. It's easier to take a shower and change clothes in public when not worrying that you might be seen or watched by strangers. Hehe! 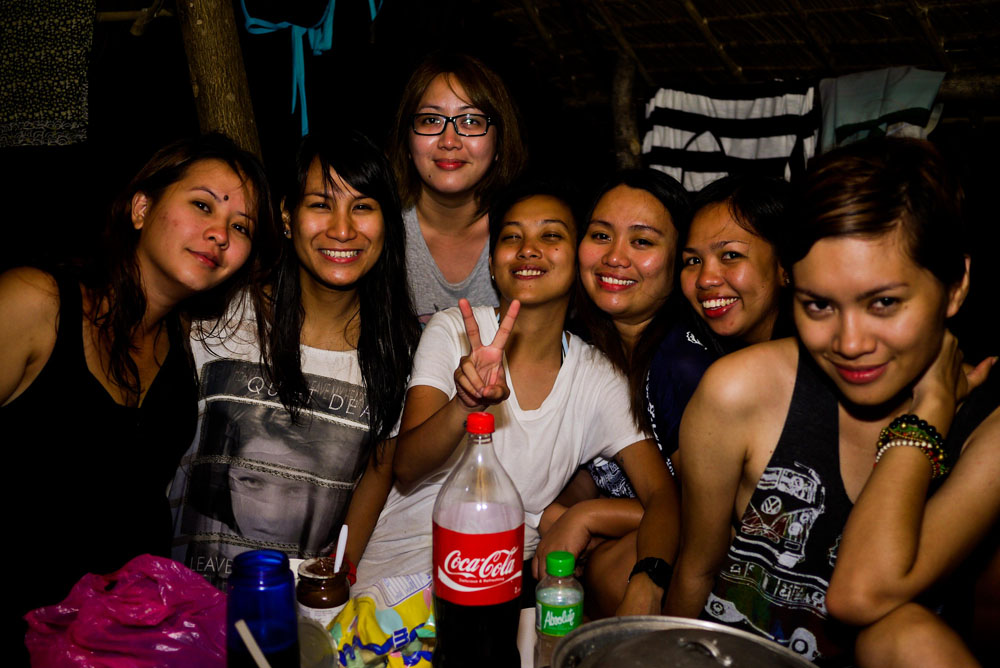 
On the other side of the island is another story. Guests of the Calaguas Hullabaloo tour get to enjoy lights, sounds and drinks. Yes, you read that right. They've got electricity over there. The organizers brought their own generator. 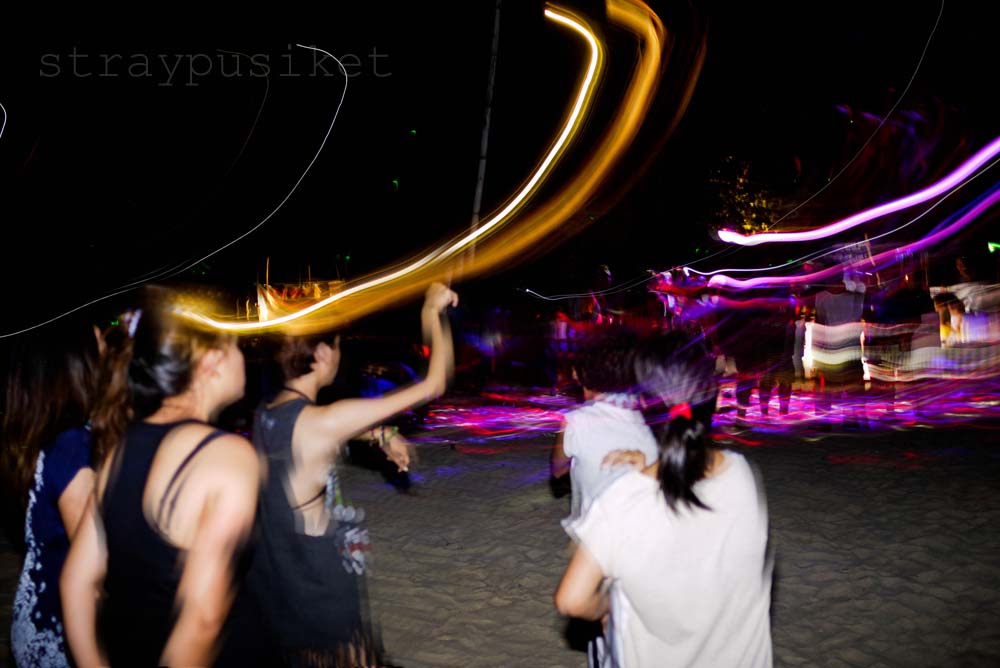 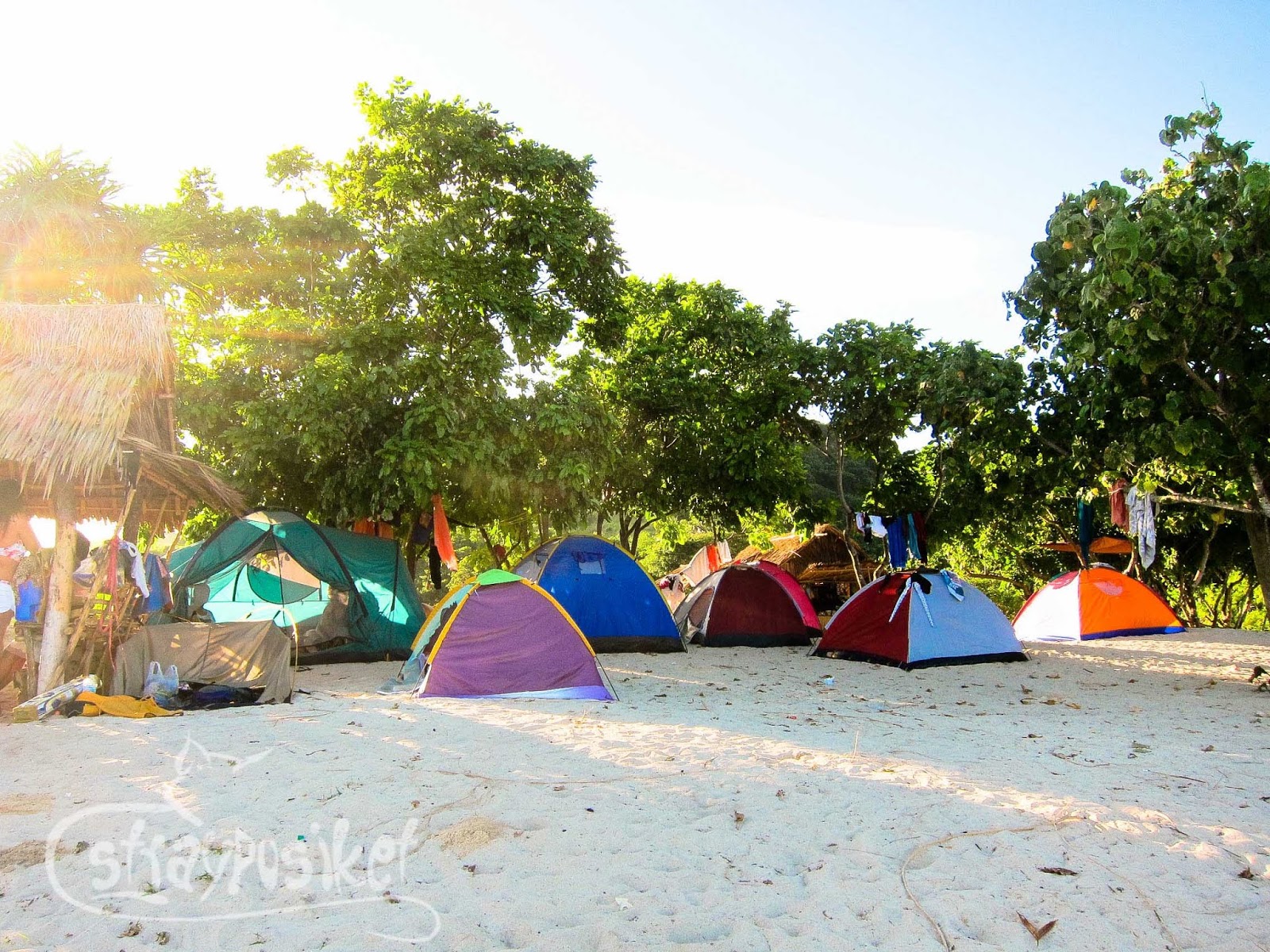 We were forced to get up before 7am because our neighbors (other group) were too noisy. Hmp! 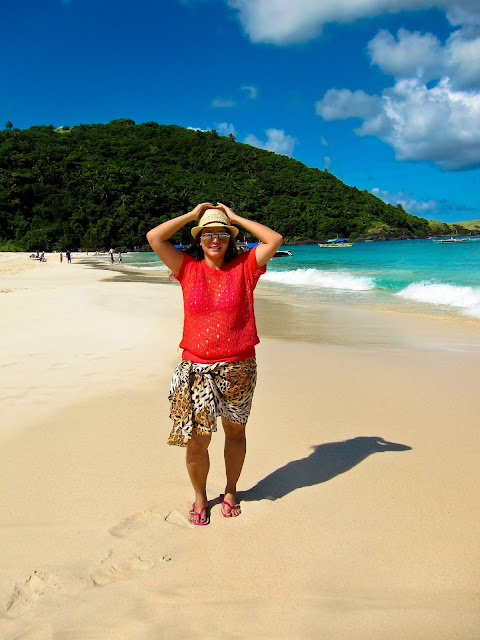 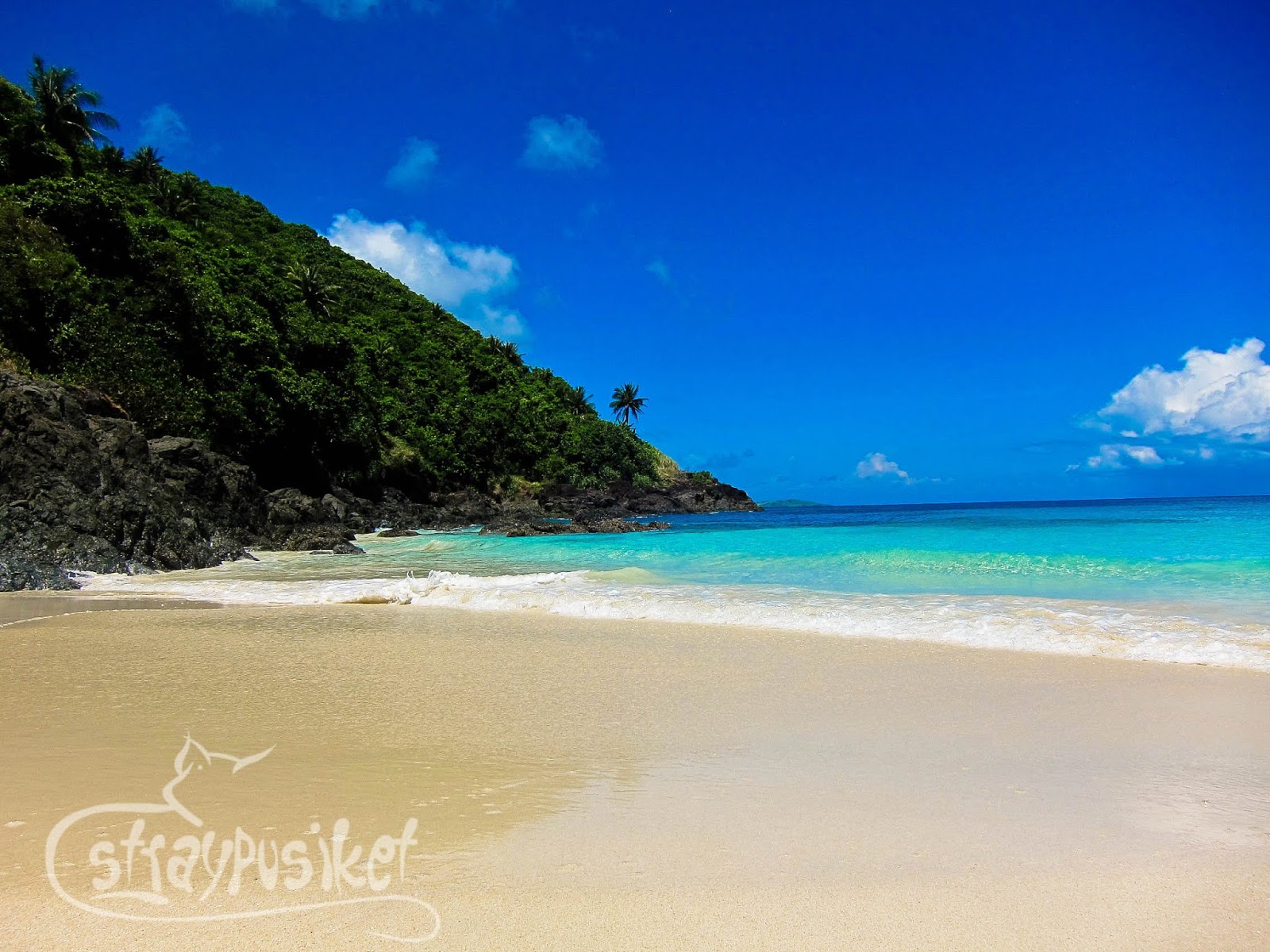 picturesque view of the rightmost side of the island 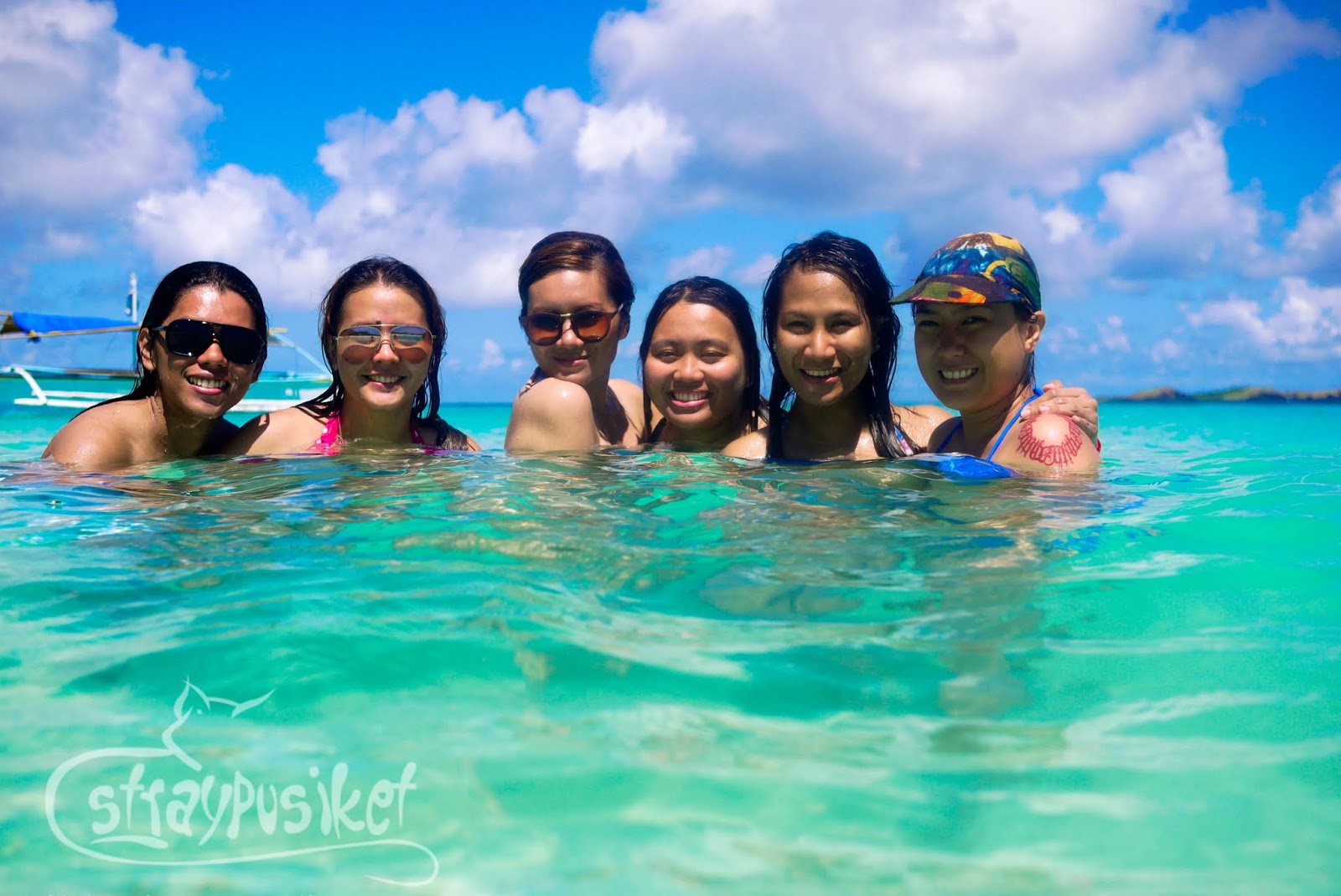 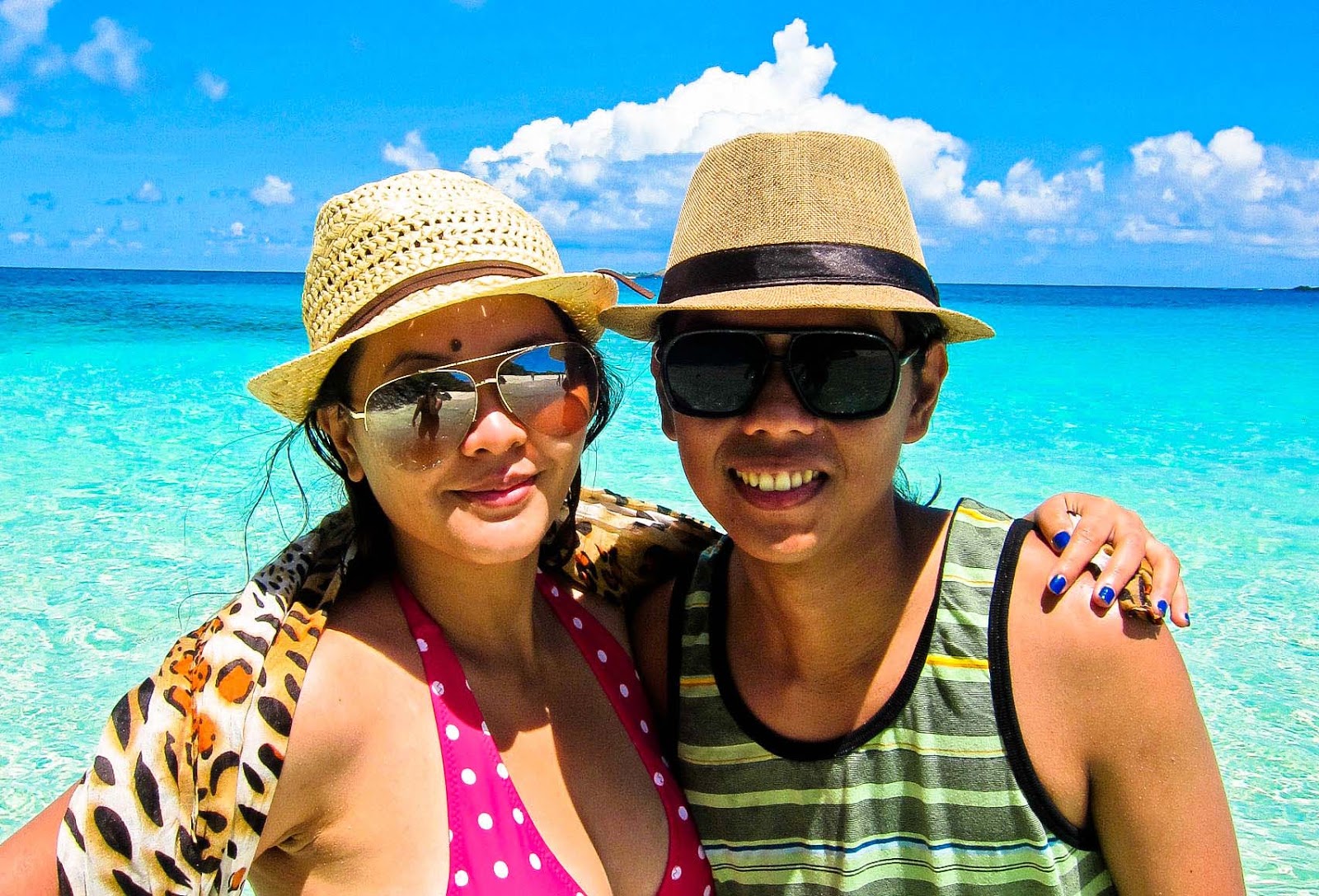 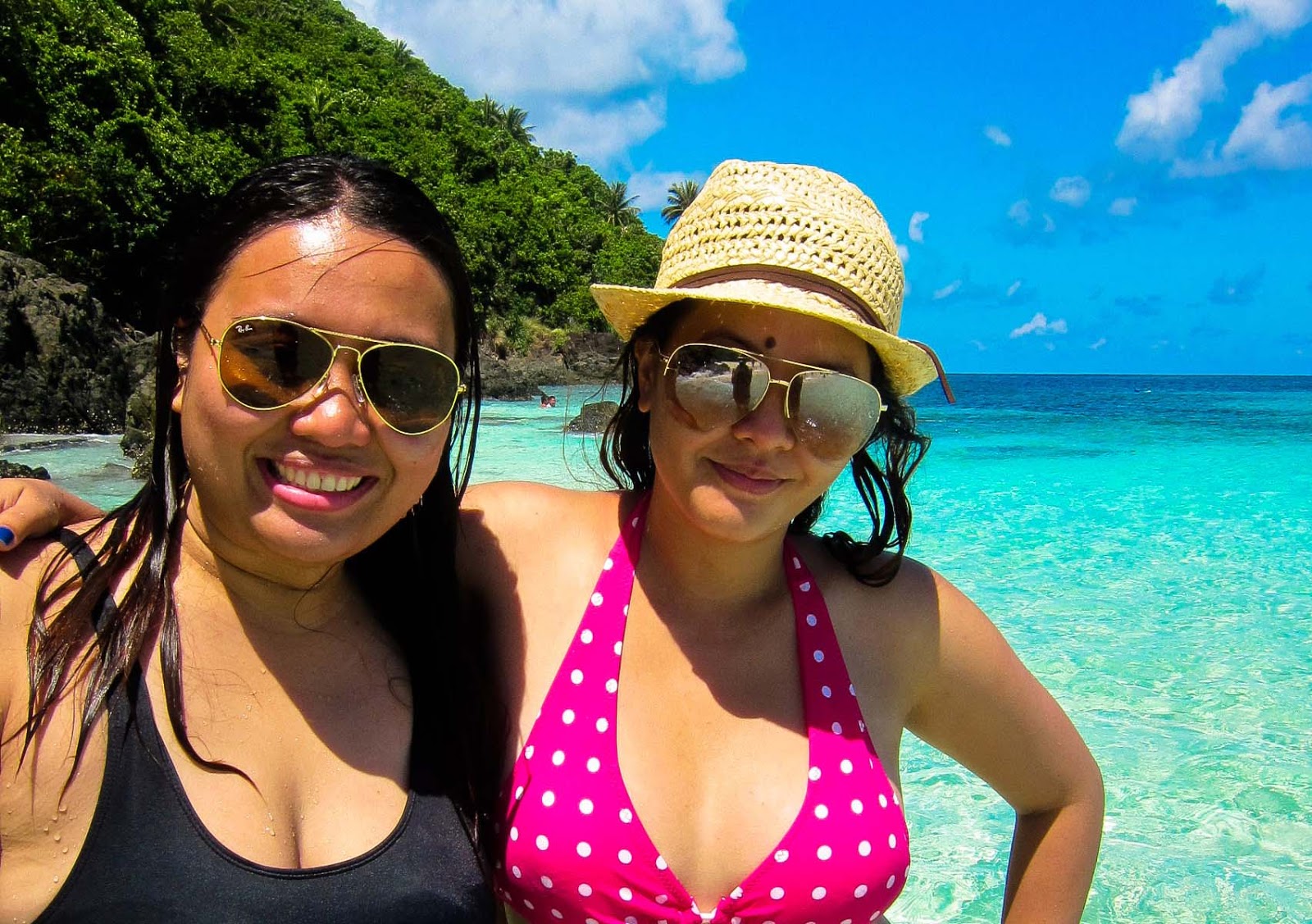 
We left around noon to avoid the strong waves and decided to take a shower and have lunch in Paracale. 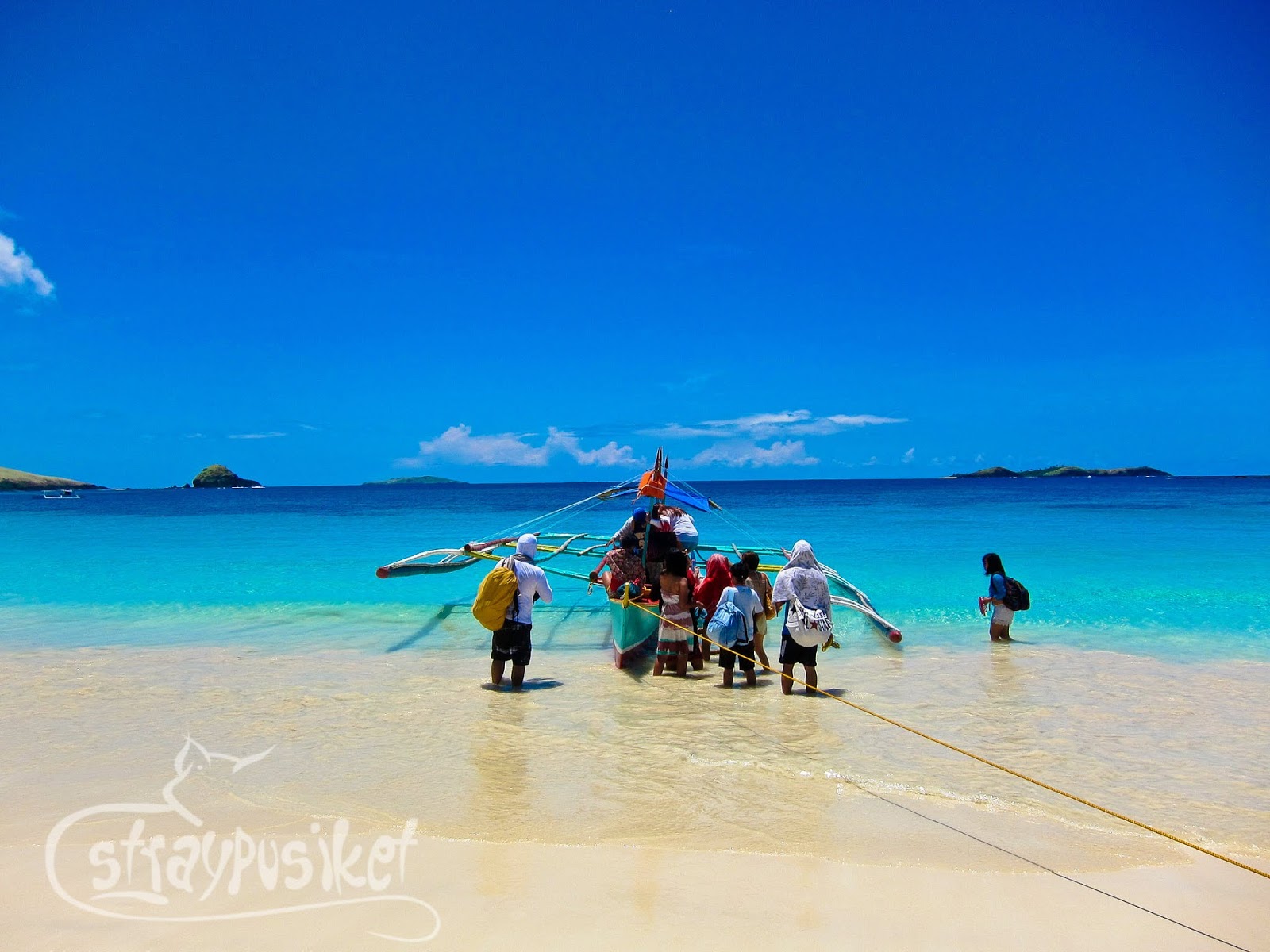 Thank you for the experience, Calaguas.

Notes:
Superlines has the only direct trip from Manila-Paracale. Fare is Php515 per way (Aircon). Bus originally leaves at 7:45PM from its Cubao Terminal (southbound) but since some of us arrived late (that includes me), we left around 8:20PM. The trip took almost 9 hours with 2 stopovers (quick wiwi stop in Calamba, Laguna and 30-min stop in Atimonan Quezon.) Bus dropped us off at Malayan Tourist Inn/Shell Gas Station in Paracale.  The only trip back to Manila from Paracale is scheduled at 6:45PM. Bus also leaves from Malayan Tourist Inn. Ticket reservations is a must! If you failed to reserve a ticket, or if the conductor forgot to reserve you a ticket that you almost wanted to kill him, fret not because there are buses which leave from Panganiban and Daet (both are 30 minutes away from Paracale). Or in our case, since we are 19 in the group, we requested Superlines to open another trip for us and poof! came the 7PM bus.

Tricycle ride to the port is Php 10 per head. You will be dropped off in a fishing village and have to walk a few meters to reach the shore.

Water supply via a deep well pump for taking a shower or for doing your "thing" is at Php 10 per pail.

There is an available concrete toilet for ladies and gents. There are no facilities for taking a shower except for the area near the water pump.

If your charcoal takes forever to burn, you can ask the locals to cook your food for Php 50.

Electricity in the island is non-existent so bring flash lights or gas lamps and charge your gadgets at home.

To the person aboard the Superlines 313 trip bound to Paracale/Panganiban last April 12-13, 2013 who found the ALPS Mountaineering tent fabric and rainfly, if you have a kind heart, please return it to me.