Almost everyone was there at the gate including the manager to send their well wishes.  Sina and the other staff helped us load our luggage into the bus. We were also reminded to look after our stuff when we arrive at the terminal. It felt like leaving a relative's house. We thanked everyone and bade them goodbye. And then the bus zoomed off. 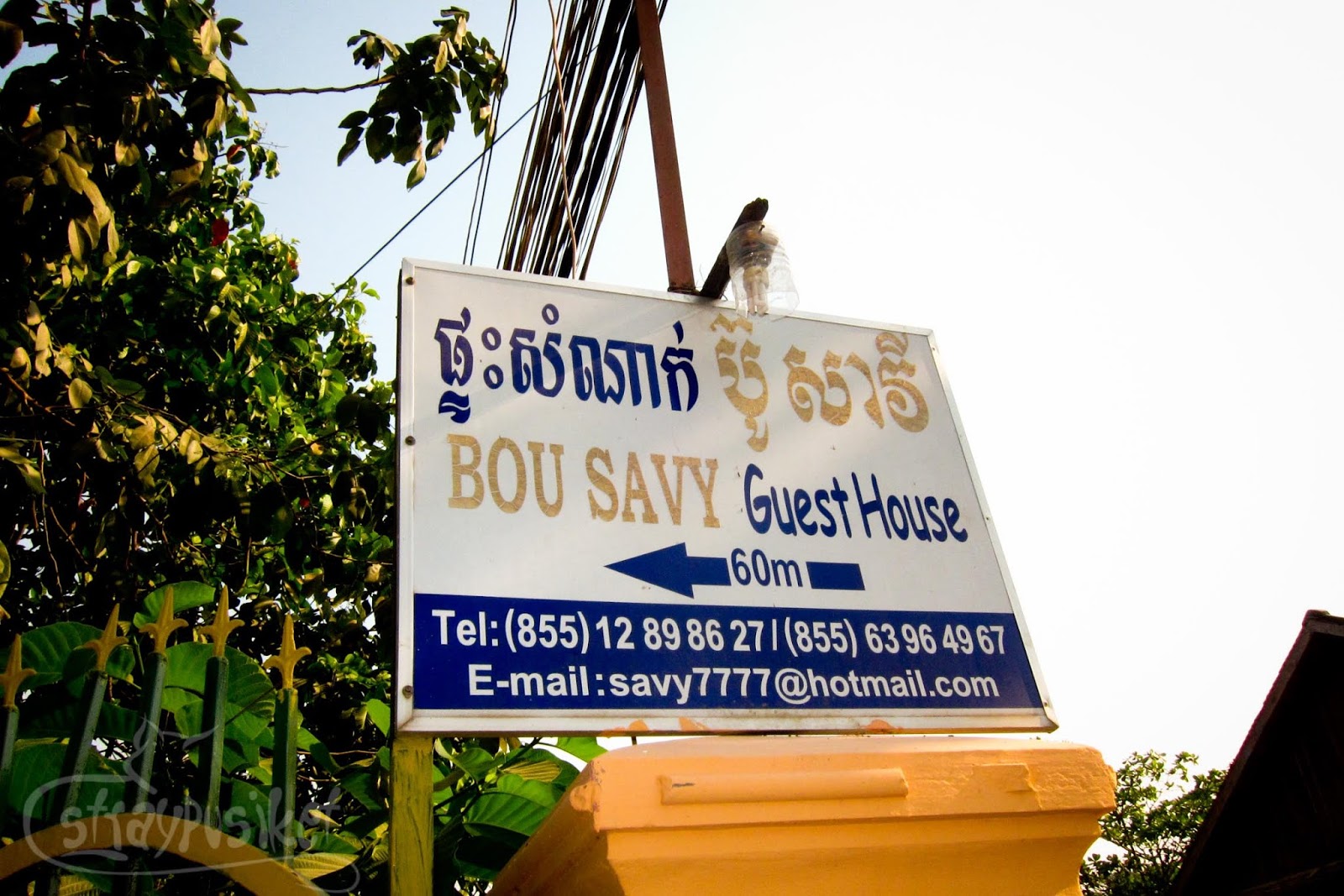 The Mekong Express pick-up service is a mini bus that can accommodate around 12-15 passengers.
We picked up a few more passengers from other hotels before heading to the terminal. 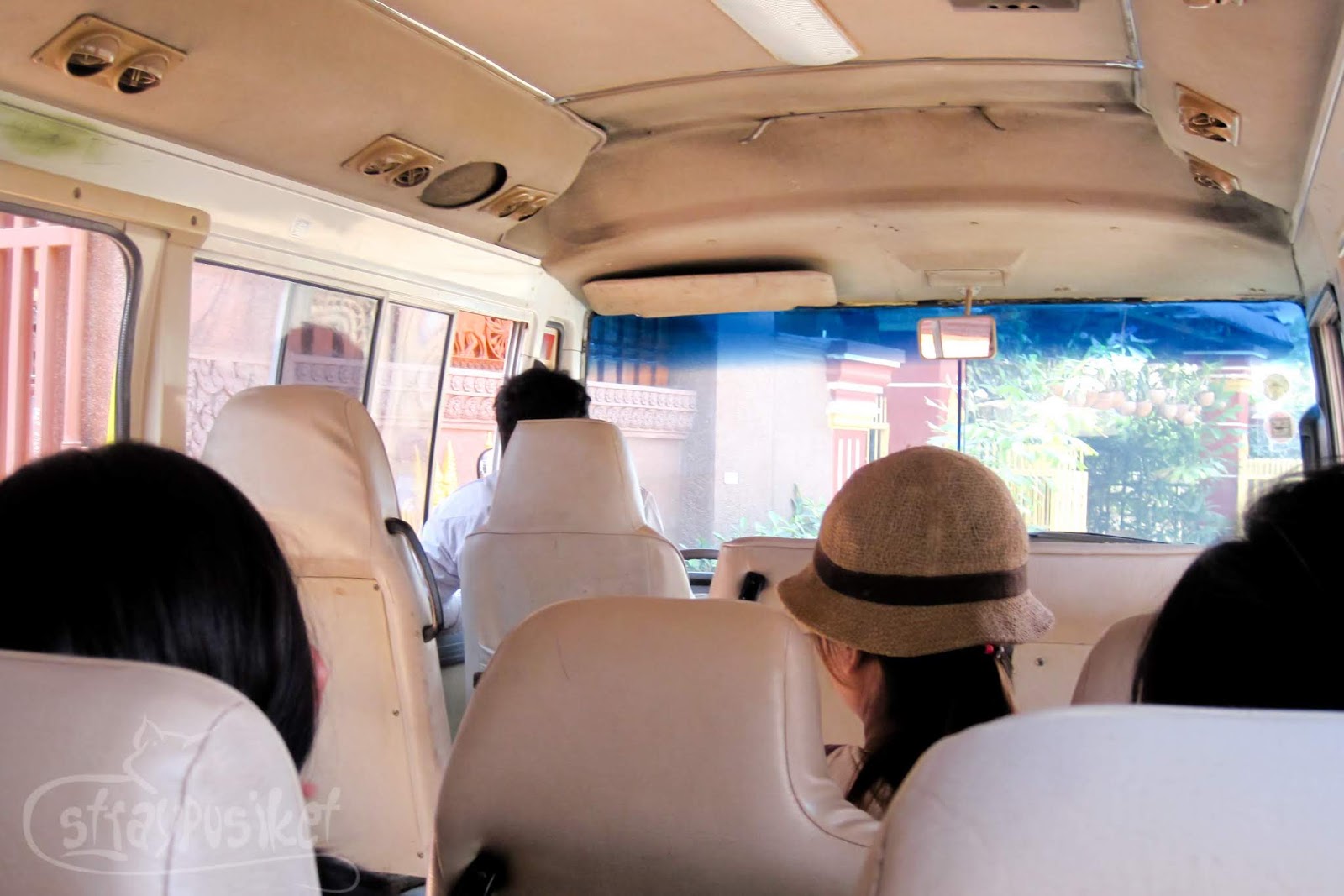 Soon we arrived at the Chong Kov Sou bus station. 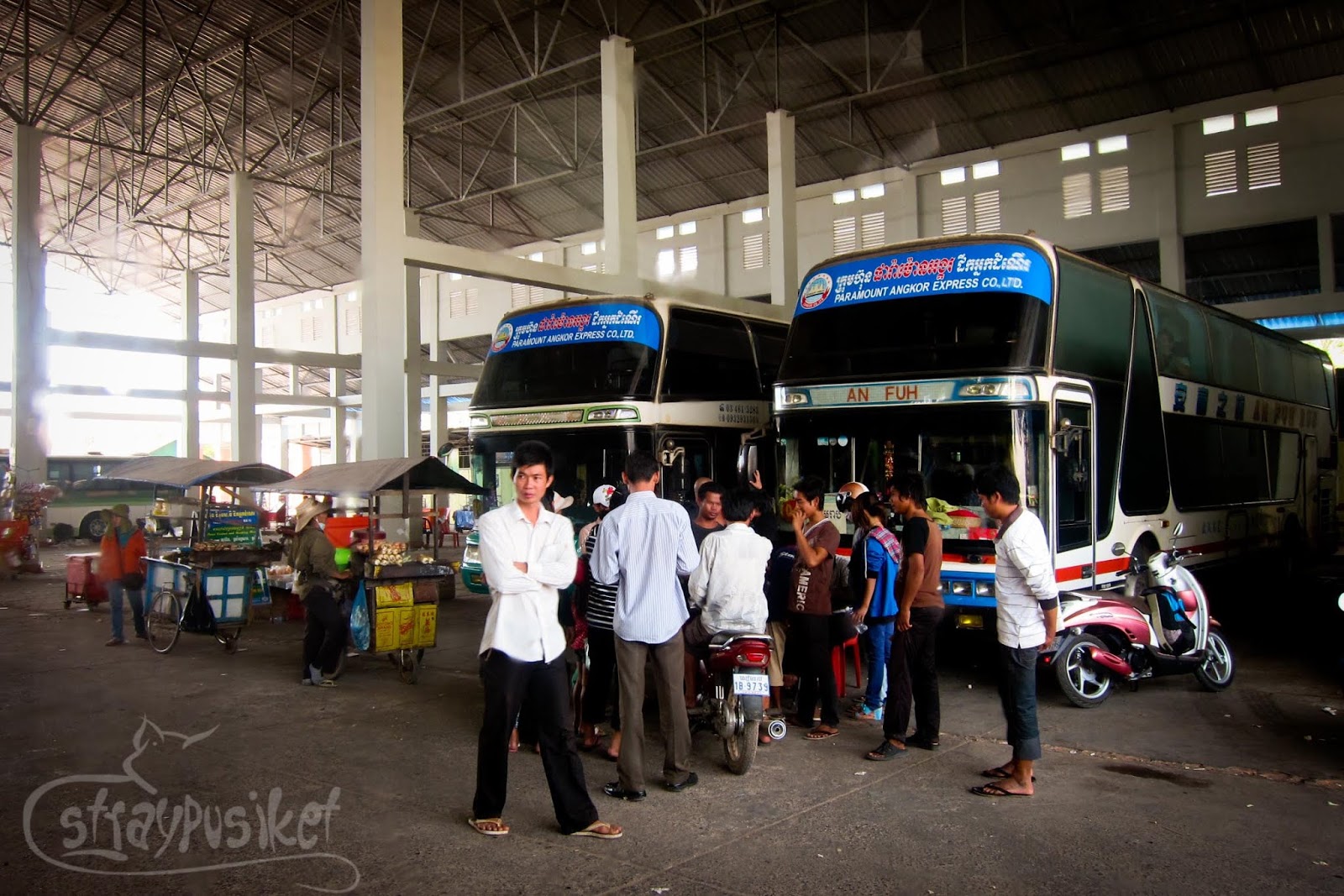 We approached the Mekong Express counter (a table actually) and presented our tickets. 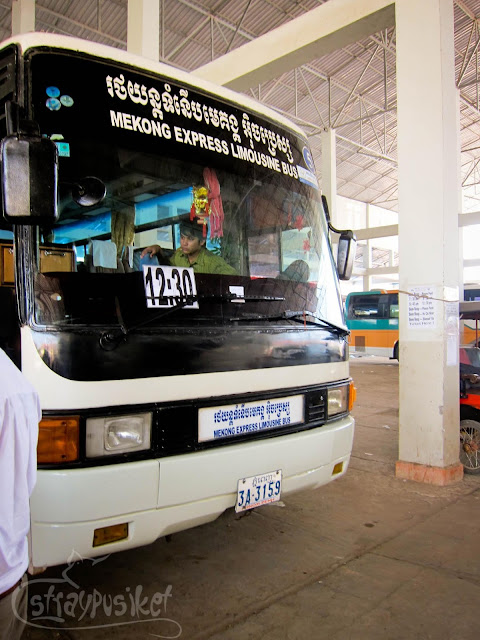 our bus to Phnom Penh

Our bags were tagged before they were placed at the compartment. And then we went up the bus and located our assigned seats. 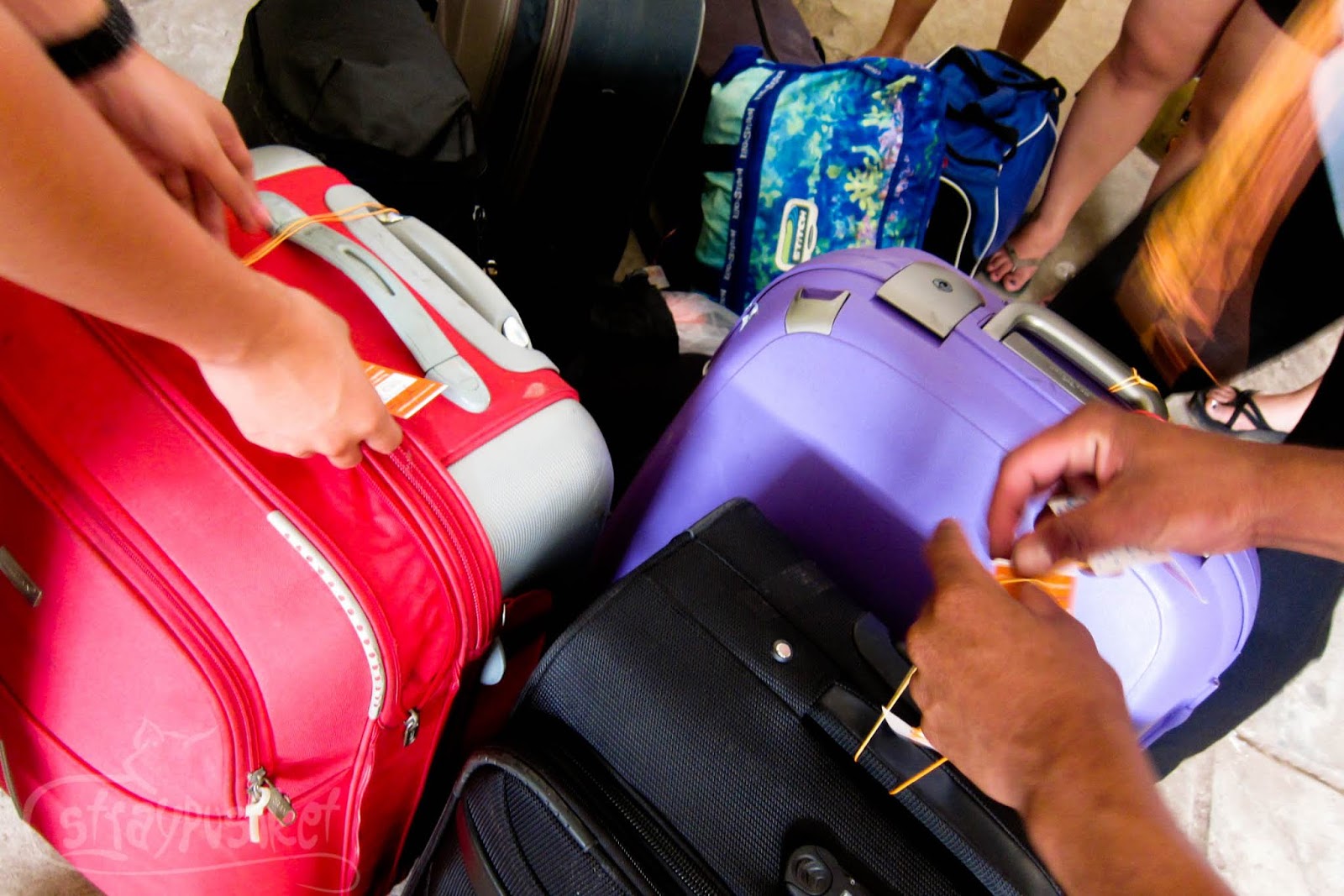 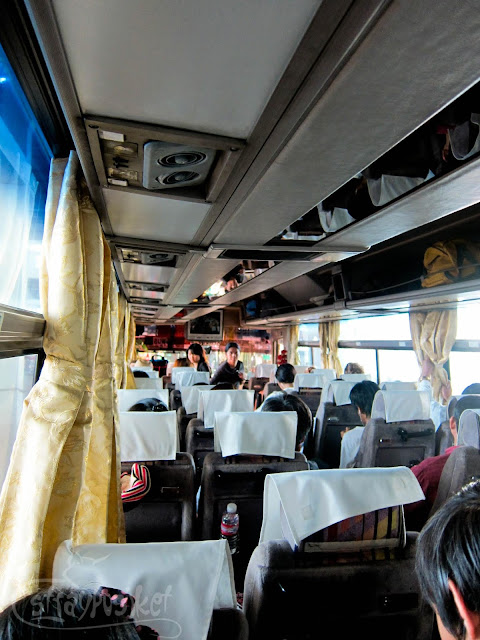 There is enough leg room at least for average Asians like us. But for Westerners? I don't think so. A Scandinavian couple was seated behind us and I can feel the guy's knee poking my back. 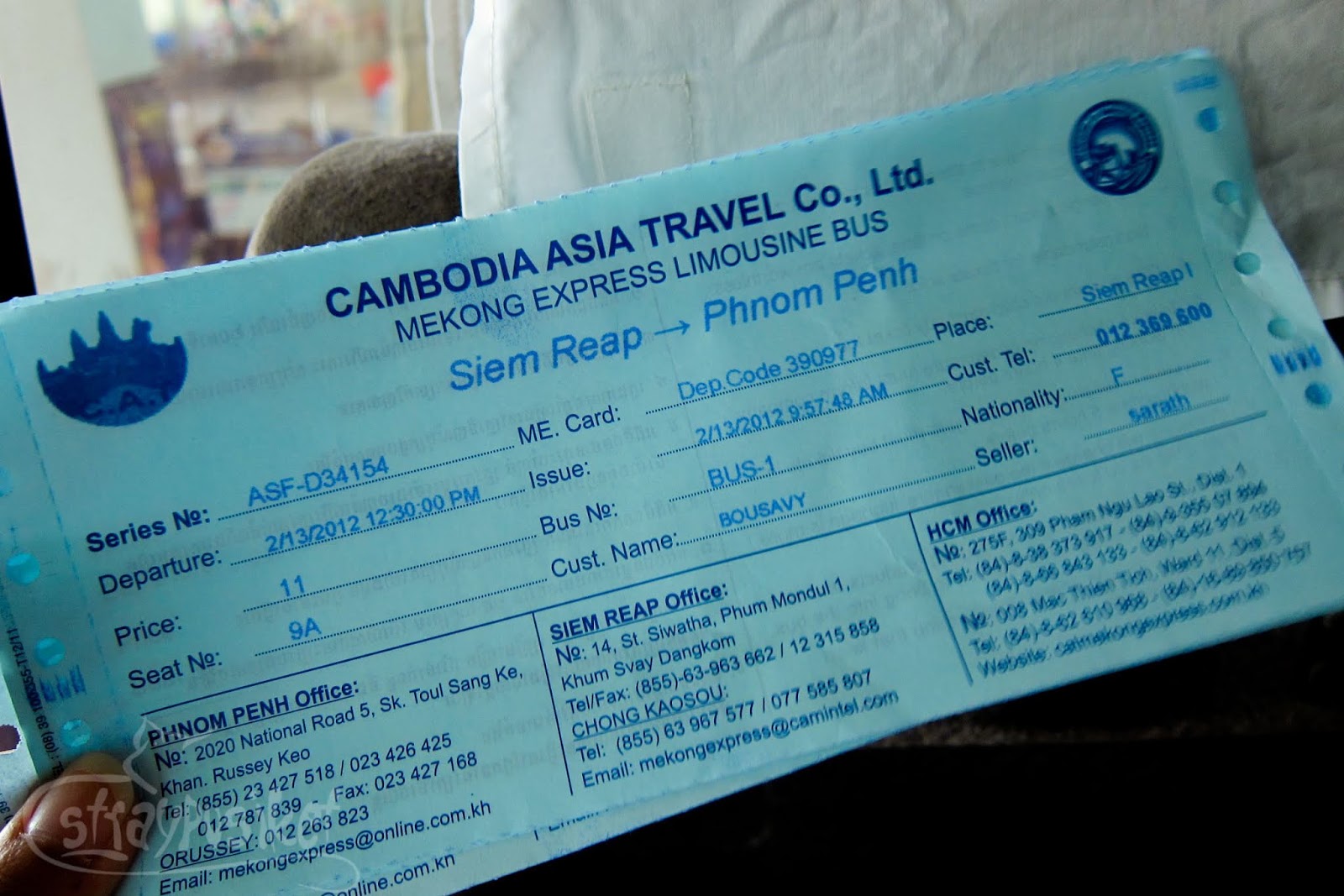 bus ticket
As the bus started to move, the steward made a brief introduction over the microphone and started handing us our wet towels, 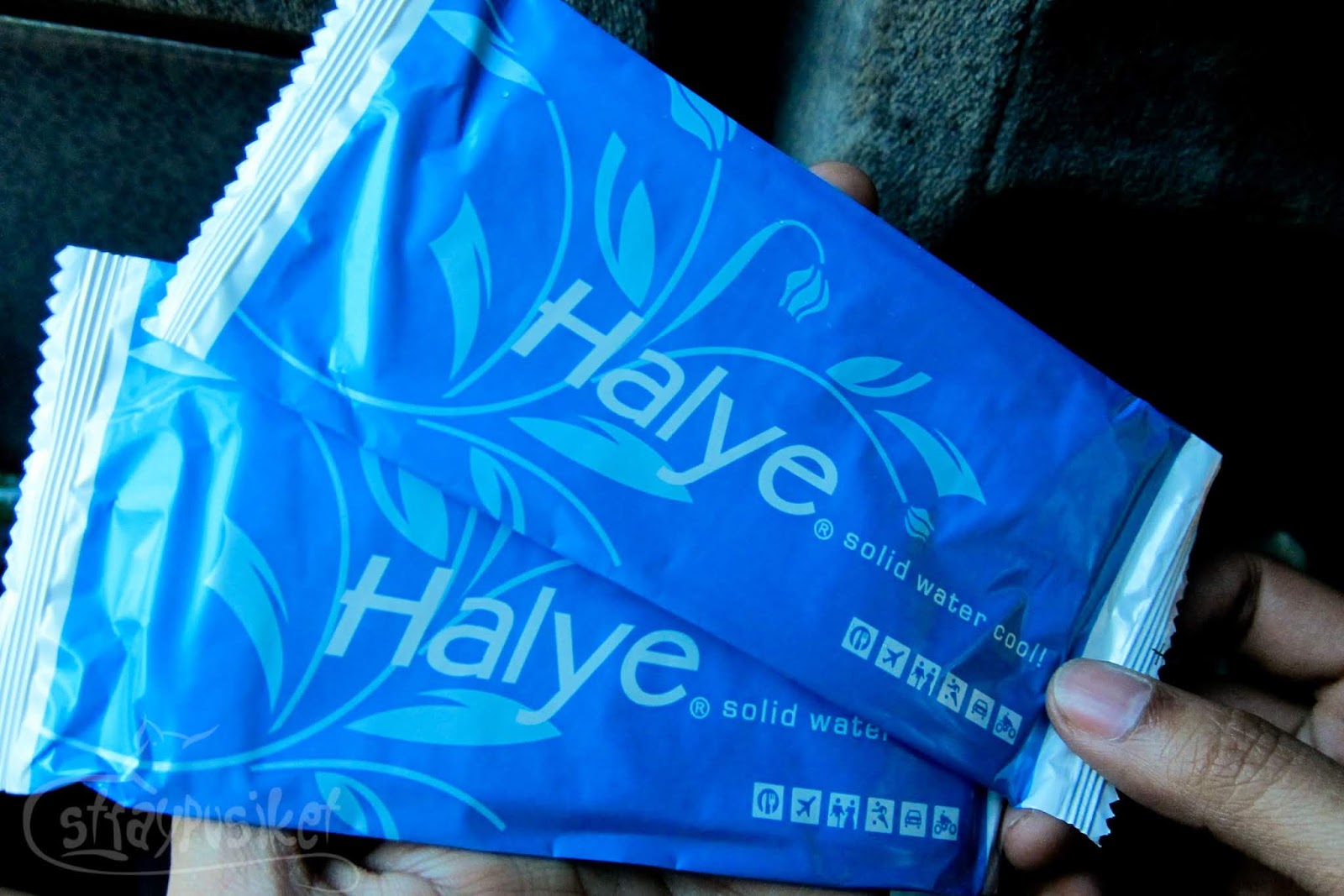 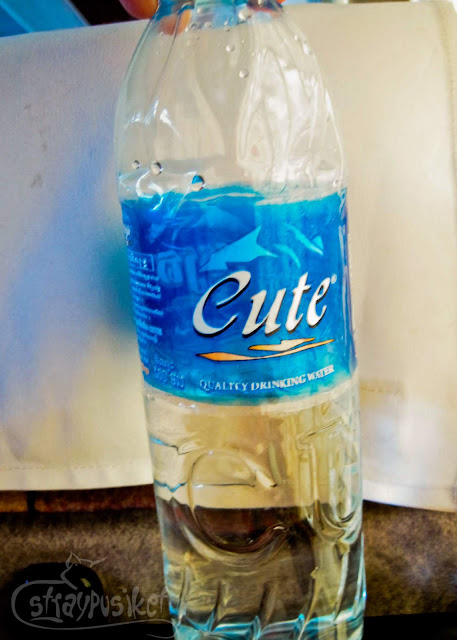 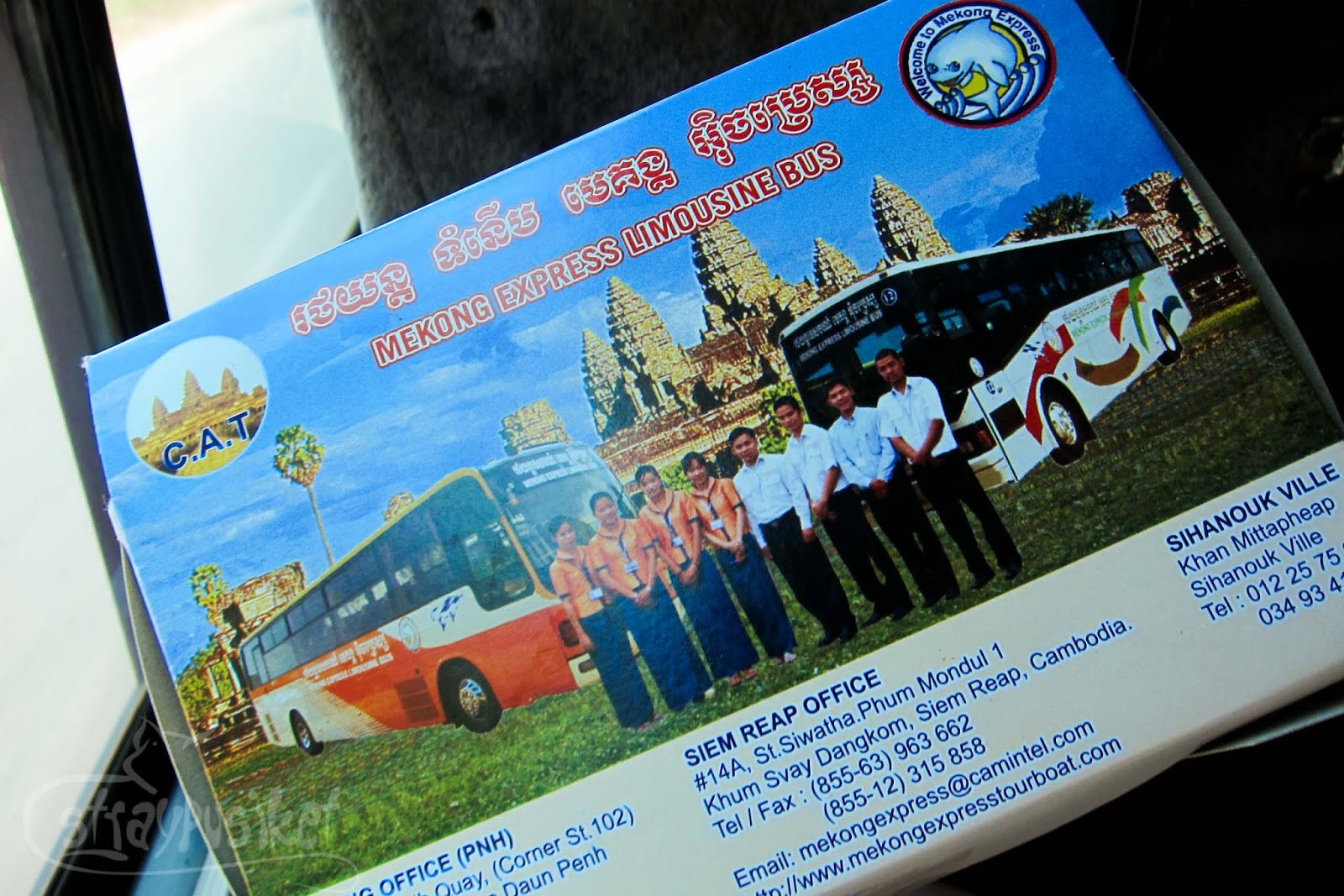 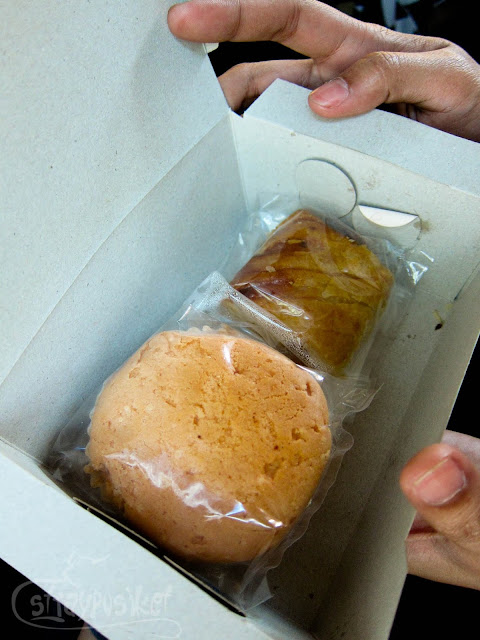 It was smooth on the first three hours of our journey until we heard a very loud crackling sound coming from under our seats.  My friends and I stared at each other in shock. The other passengers were calm as if they haven’t heard anything. I looked at the driver through his rear mirror but his face was blank too. Poker face eh? The bus didn’t stop but we felt it slowed down. So we thought it was the tire and the driver might be looking for a tire service shop. The bus eventually pulled over and the steward grabbed on the microphone and made an announcement which we didn't quite understand. He must be telling us to go down since the passengers seated were already getting off the bus. And so everyone followed including us. And yes, the back tire was the culprit.

We found shade under the tree while watching the mechanics replace the tire. 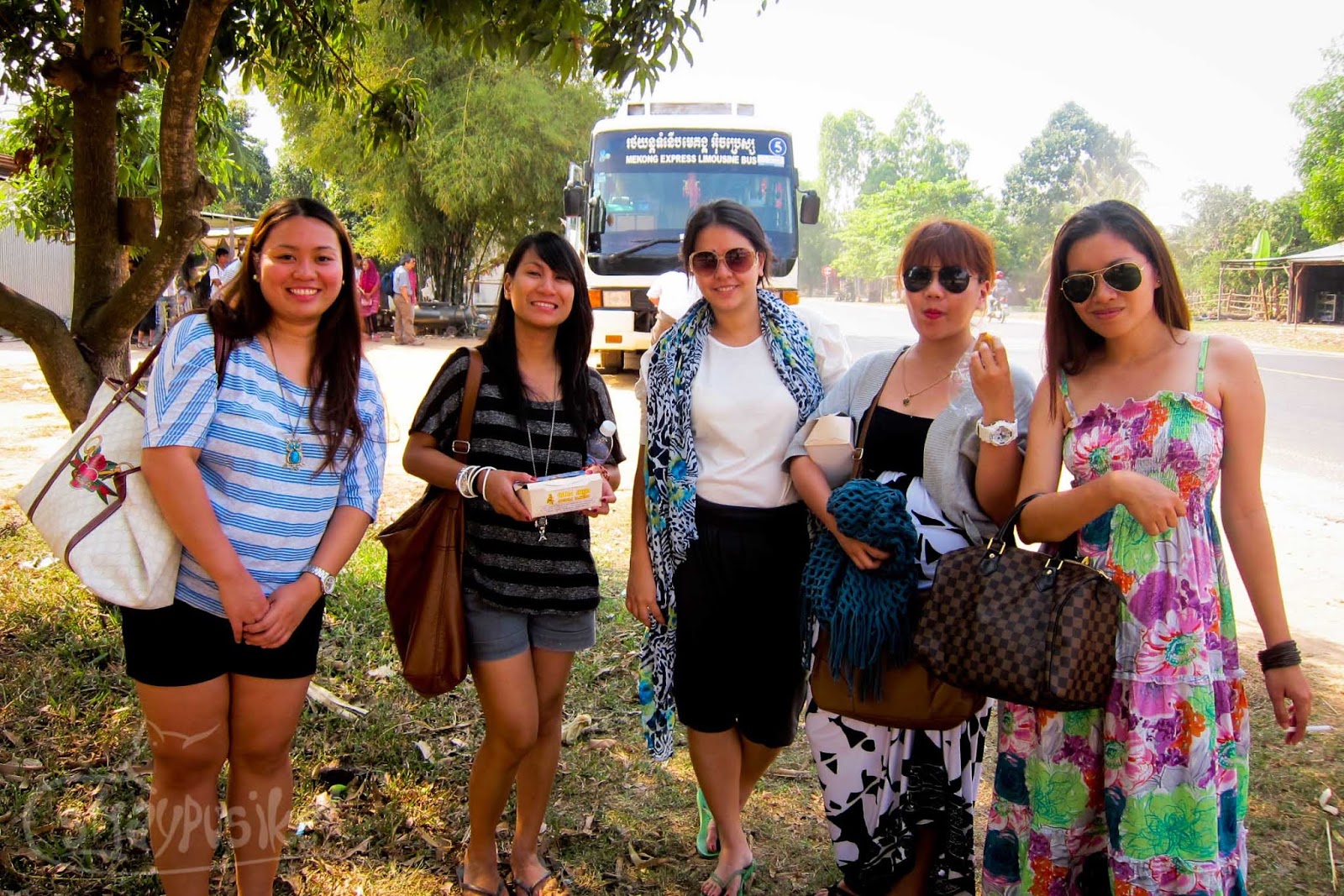 The tire was so old and worn-out. Ehem! 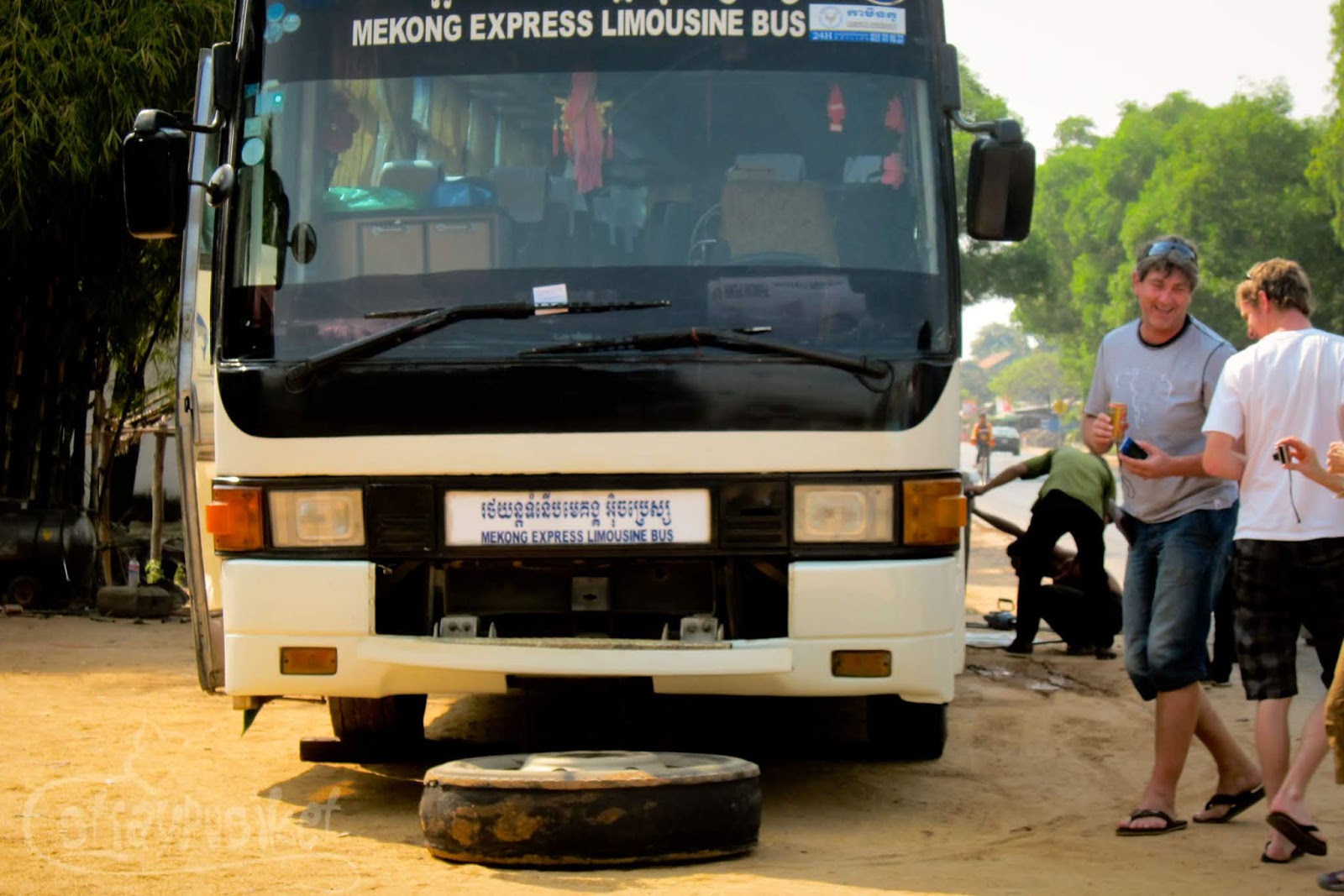 It took only a few minutes and the steward motioned everyone to get on the bus. 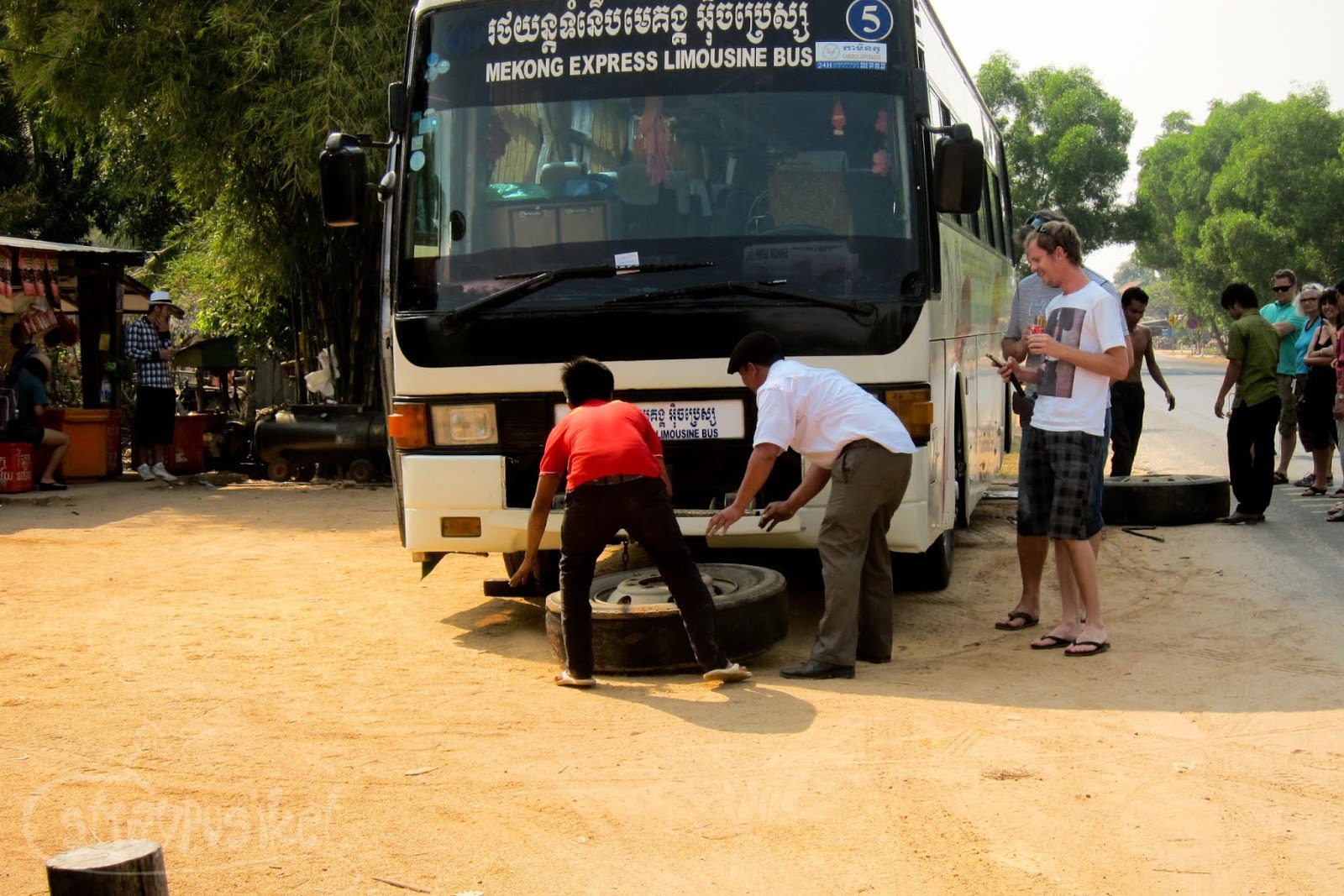 We had a stopover at some town in Cambodia. We bought some snacks from the roadside vendors. 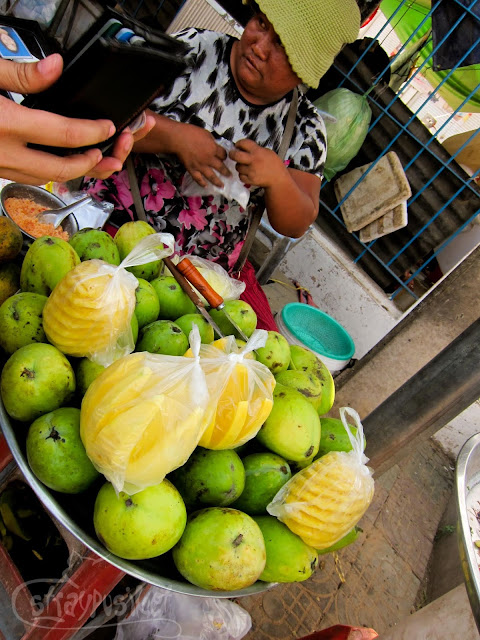 These semi-riped mangoes are sweet and taste like Indian mangoes. They're really good especially when dipped in chili salt. 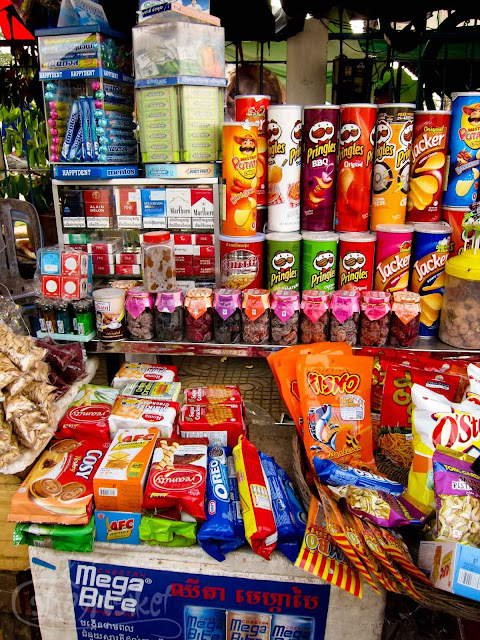 Beside these "normal" snacks are some fried bugs. 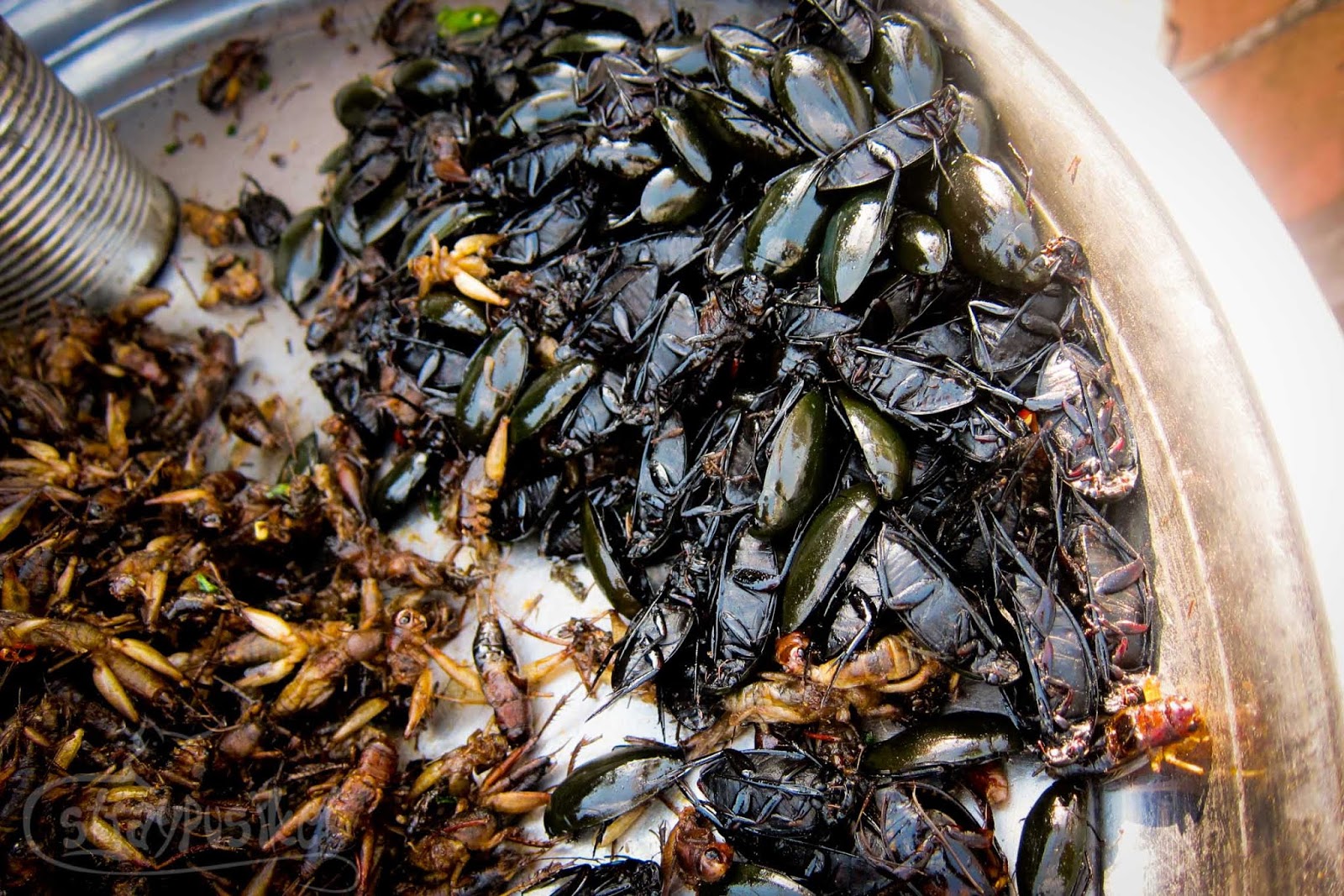 We asked the lady vendor to sample some and Dell was game to eat at least two. One of our fellow passengers, a Westerner), got curious and asked us if it tastes good. Dell pretended he liked it so that he can try it too but he never dared to. Haha. 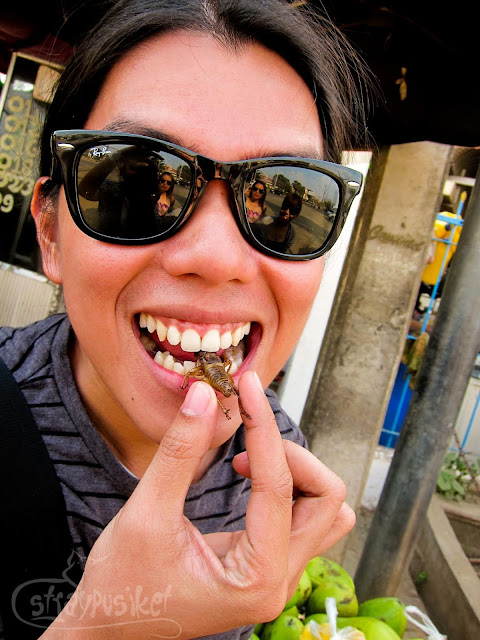 We continued our journey for 3 more hours along unpaved roads. Sometimes only half of the road is passable due to road constructions. 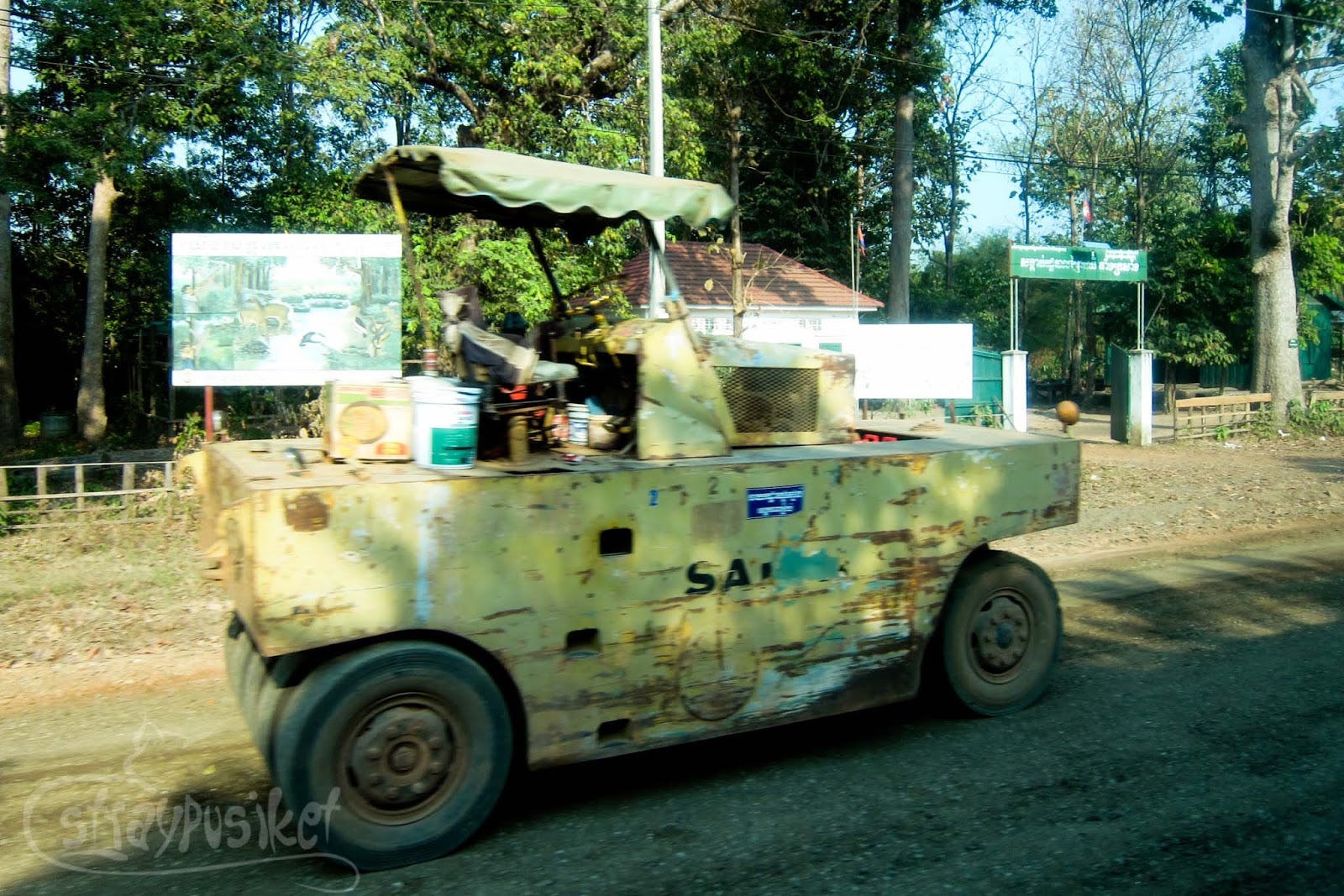 Finally, around 7pm, we arrived at the Mekong Express terminal in Phnom Penh. We collected our bags (thankfully they're still complete and intact) and we’re approached by tuktuk drivers offering us a ride. 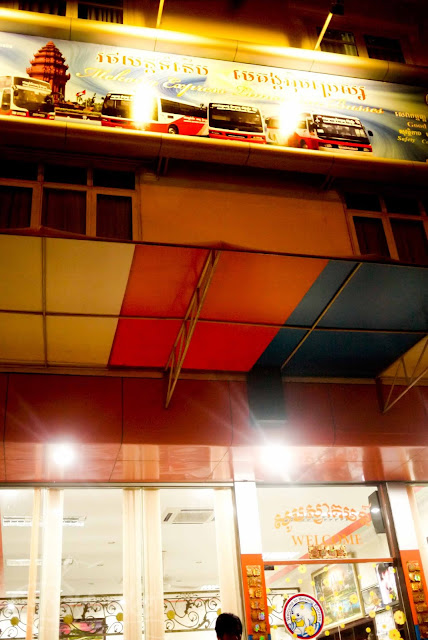 We met a friendly driver who speaks English well and he assisted us to buy the tickets to Ho Chi Minh. We were just in time as there were only 6 seats left for the 830am trip.

As soon as we’re ready, they offered to take us to our hotel. Unlike the tuktuks in Siem Reap, their tuktuks have compartments at the back for bags so we only had to hire 2 tuktuks. Before we left, the driver made sure that we secure our belongings because according to him the area isn’t safe.

Thankfully, we reached Velkommen Guesthouse safely. It was only less than 5 minutes away from the terminal. We were charged $6 total.